Morocco World News
Home Highlights on Morocco Implementation of New Constitution Is Key to Put Morocco on the Path...

New York - At one of the most crucial junctures in the promotion of democracy and good governance in Morocco, following the constitutional reforms in Morocco and ahead of the early parliamentary elections scheduled for November 25, Morocco World News organized a panel discussion in partnership with the Middle East Institute of Columbia University under the theme: “The Moroccan Constitutional Reforms and the Forthcoming Elections, Prospects for a Genuine Democracy?” The event took place on November 15, 2011 at Columbia University’s campus in New York City. 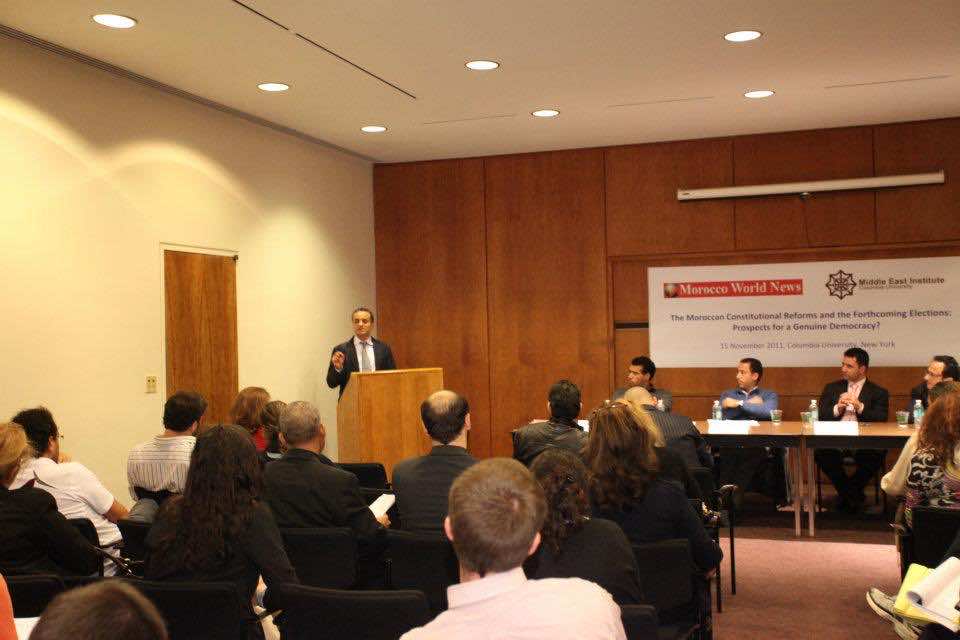 By
Adnane Bennis
-
Adnane Bennis is a national of Morocco, obtained his Bachelor’s Degree in Computer and Information Science from East west University in Chicago.
Nov 19, 2011

New York – At one of the most crucial junctures in the promotion of democracy and good governance in Morocco, following the constitutional reforms in Morocco and ahead of the early parliamentary elections scheduled for November 25, Morocco World News organized a panel discussion in partnership with the Middle East Institute of Columbia University under the theme: “The Moroccan Constitutional Reforms and the Forthcoming Elections, Prospects for a Genuine Democracy?” The event took place on November 15, 2011 at Columbia University’s campus in New York City.

This year has witnessed the eruption of the “Arab Spring” which took everyone by surprise. This democratic awakening of the Arab people had a domino effect that reached all Arab countries, because of the interrelation among people of the region, as well as the systemic structural resemblance of their political systems. The lack of freedoms and equality, the prevalence of nepotism and corruption, the pervasive feeling of discontent and humiliation were all catalysts that led to the massive demonstrations that rocked the Arab street.

While most of the Arab regimes dealt with protesters in an iron-fisted way, and followed an approach that has lead to intractable, ominous repercussions, Morocco took a different course.

This promising path, which has been hailed by world leaders, started with an early reaction by the King of Morocco, who was quick to reach out to demonstrators and set out to answer their demands and aspirations. On June 9, constitutional reforms were introduced. These reforms were overwhelmingly approved by voters in a referendum on July 1.

Yet, the protest movement, dubbed as “The February 20”, boycotted the referendum and continued its demonstrations hitherto. Its components claimed that reforms introduced by the Monarch “fell short” of their aspirations in breaking away with corruption, impunity and laying the foundation for a genuine constitutional monarchy.

In addition to the constitutional reforms that are meant to cement democracy and promote good governance, Morocco again will be in the spotlight  on November 25 as it will conduct early parliamentary elections . The results of this forthcoming election will be crucial and decisive as they will mark the advent of a new era of a government with enhanced powers for the parliament guaranteed under the provisions of the new constitution.

Recognizing the importance of this political process that Morocco is undergoing and analyzing its many dimensions and facets, Morocco World News invited four members from academia of different backgrounds and ideologies to address the socio-economic issues, shed light on the ongoing political changes and explore possible scenarios the Kingdom may face.

Is Morocco an exception?

A confounding question that has been raising eyebrows is whether Morocco is an exception or can its case be seen as similar to other countries of the region. Since the inception of the “Arab uprising” in Tunisia and Egypt, many politicians and observers in Morocco and abroad alike, have emphasized that the latter is an exception in the Arab world and that, under the rein of King Mohammed VI, the Kingdom has enjoyed an evolution in terms of human rights, freedoms and gender equality. In the same regard, the political scene in Morocco has undergone numerous changes.

As soon as the King Mohammed VI took power, some senior officials of the previous era were sacked, a new family code “Mudawana” was introduced to advance the status of women. The Equity and Reconciliation Commission was put in place in 2004 in order to rehabilitate and compensate victims of human rights abuses. Although they have been well received by the population, these reforms were partial and cautious. They did not bring about a dramatic change in the day-to-day practical life for Moroccans. Old practices of favoritism, corruption and lack of transparency remained deeply ingrained as a model of public governance. As a result of these practices, the socio-economic conditions of the bulk of Moroccans worsened. Disappointment, discontent and hopelessness, as well as the feeling of inequality and injustice became the norm among the population.

For these reasons, some observers argue that the situation in Morocco is not an exception to the situations that brought about the protests in both Tunisia and Egypt. However, the only and meaningful way in which Morocco can be considered an exception is “the behavior of the regime” said Youness Abouyoub, professor at Columbia University. The way the Moroccan regime dealt with demonstrations was smart and mature: “a strategy of co-opting” he added. This can be explained through the fast reaction of King Mohammed VI to address his people’s demands for greater freedoms, the limitation of his power and greater accountability of the political elite.

In addition, the Monarchy enjoys a significant advantage compared to other Arab governments. The Kingdom in Morocco has long been revered by its citizens; more so than even other Arab monarchies in part because of its tradition dating back centuries. This revealed itself among protestors, who notably never called for the King’s abdication, but for the establishment of European style constitutional-monarchy.

What is the “February 20 Movement?”

The panelists also discussed “the February 20 Movement” as a political force that expedited reform and opened new windows towards genuine change. The bulk of political parties were “sharing the cake and were adamant on clinging to their power because they felt threatened in case real democratization is to be implemented” noted Ebrahim El Guabli, university professor at Swarthmore College (Pennsylvania). Their take was to delay democratization under the excuse of reaching “a consensus with the monarchy,” he added.

In the midst of this political mishmash, “the February 20 Movement” came into the scene to put pressure on the political elite and coerce it into breaking with the old fraudulent practices that harmed Morocco’s social fabric.  El Guabli went on to say that this movement consists of “activists who demand dignity, need change and ask for redistribution of wealth and the adoption of a new constitution that represents the popular will”.

They were inspired by the Tunisian revolution and increasingly gained momentum to form a popular force to lead political change in the country. This movement managed to do in weeks what political parties failed to do in decades. Energized by a strong will and a pro-democracy spirit, it dared to tackle taboos and raise public awareness concerning real, genuine change to uplift Moroccan political sphere from its chronic parochialism.

Is PJD riding the islamist wave within the Maghreb?

One of the major questions that the debate tried to tackle was forecasting the possible scenarios of the outcome of the elections. All four scholars emphasized the importance of voter turnout as key to successful reforms; a low turnout similar to that of the previous elections will not only widen the gap between the masses and political parties, but also perpetuate the culture of political apathy, notably among the youth. For this reason, new blood ought to be pumped to the veins of political parties in order to rejuvenate the political elite. By the same token, alliances are formed by parties either “to consolidate their chances to win and spearhead the government or to stanch and counter the Islamist tide as is the case with the alliance of the G8” stated Anouar Boukhars, professor of international relations at McDaniel College (Maryland). He stressed that “the perception is dangerous for the street if political parties failed to form an alliance.”  There is a mixture of feelings that persists during these elections tattering from hope, fear and doubts to frustration and disappointment. Therefore, election turnouts are critical.

As the turnouts in neighboring Tunisia were in favor of the Islamist Ennahda party, the Moroccan PJD is widely expected to take the lead. Following the trend in the region as islamists are increasingly gaining influence not only in Tunisia but also in Libya and Egypt, Islamist parties are increasingly gaining acceptance by everyone, in and outside of the region. The PJD consider themselves poised to win the majority. This confidence lead the head of the party to declare in a speech that “if we don’t win them, then they are rigged.” This statement is pregnant of meanings. The Justice and Development Party regard their presence and participation as crucial to bringing tranquility to the street, playing the role of the fireman against a frustrated population. This power stemmed from the fact that they are uncorrupted, since they have never been part of any government.

The concept of cultural development

Anoaur Majid, director of “Center for Global Humanities”, University of New England (Maine), a center specializing in cultural interactions and exchanges among civilizations, explained the importance of understanding the concept of democracy as a “cultural and social practice” before being a political one. “What we need in Morocco right now is to be what we choose” he noted, as a step to abandon the cultural and political tyranny that puts constant pressure on people to be stagnant. Diversity is crucial to foster a democratic society.

Moroccan social, cultural and political systems ought to be regulated well as “the new constitution calls for”, added the professor, to unleash creativity and intellectual powers of Moroccans. Freedom is not related to what politicians do or do not do; it is, rather, about equal opportunity, human enrichment and the ability to invent and create regardless of race, religion, gender or age.

All scholars placed huge emphasis on the implementation of this new constitution to achieve social development Morocco deserves. They call on not only political parties but also all other stakeholders to embrace the spirit of the Arab awakening, fully execute the constitution and built upon it to form a new social contract for this era; one that includes equality and justice, transparency and accountability, liberties and human rights.

The conference was attended by a large number of scholars, journalists, students and observers from various nationalities. The high level of active participation by the audience was indicative of the interest that the panel has stirred and the importance of the subjects discussed. “Given the notable success of this event, Morocco World News plans to continue to organize similar meetings that promote active discussion and contribute to the debate over hot issues affecting Morocco and the region” said Samir Bennis, Morocco World News co-founder and editor-in-chief.