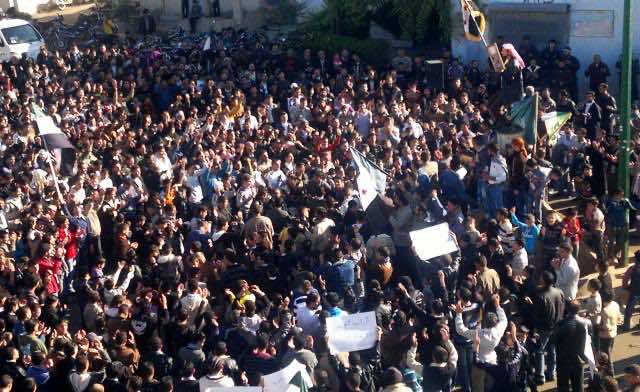 An Arab League deadline for Damascus to stop its lethal crackdown on protesters expires on Saturday, a day after Syrian security forces killed at least 12 civilians, including two children.

Turkey and the United States both raised the specter of civil war, as thousands of protesters took to the streets on Friday to urge nations to expel Syrian ambassadors, defying a massive security presence.

Russian Prime Minister Vladimir Putin called for restraint over the Syrian crisis after meeting his French counterpart Francois Fillon, who accused Assad of being deaf to pressure.

“We are calling for restraint and caution. This is our position,” Putin told a Moscow news conference, the day after his foreign minister likened the situation in Syria to a civil war.

Russia has deeply opposed Western efforts to internationalize the crisis, fearing it could clear the way for a Libya-style military intervention under a U.N. mandate.

In October, Russia and China vetoed a Western-drafted U.N. Security Council resolution that would have threatened Assad’s regime with “targeted measures” over its crackdown.

“We think that it is indispensable to increase international pressure and we have tabled a resolution at the United Nations. We hope it will find as wide support as possible,” Fillon said.

French Foreign Minister Alain Juppe, in Turkey ahead of a tour of Arab states, said the “time has come to increase sanctions” onSyria.

The risk of civil war

But, at the end of a week in which army deserters attacked an intelligence building near Damascus and waged a deadly battle with Assad’s forces, Juppe appeared to call on the opposition not to use army defectors to mount attacks.

“We are making a call to the Syrian opposition. To avoid a civil war, we hope that the army will not be mobilized. This would be a catastrophe,” Juppe said.

Turkey called the risk of civil war real, a warning echoed by analysts monitoring developments in Syria amid growing losses among regular troops at the hands of mutineers.

The Arab League said it was examining a Syrian request to make changes to a proposal to send 500 observers to Damascus to help implement a peace deal agreed earlier this month.

Syria has been told by its Arab peers to stop the lethal repression against protesters by 2200 GMT on Saturday or risk sanctions, and the Arab League has already suspended it from the 22-member bloc.

Iran called the suspension “a historic mistake” that would in itself cause civil war.

“The path the Arab League has taken is completely about defeating Syria from inside and triggering a civil war,” Alaaddin Boroujerdi, head of the Iranian parliament’s foreign policy committee, said in Turkey.

“These threats will not yield any results,” Ghadanfar Roken Abadi said on Friday. “Intensifying these threats…only increases our enthusiasm for popular unity with Syria.”

The repression against demonstrations that erupted in Syria in mid-March has claimed more than 3,500 lives, according to U.N. estimates.

Protesters initially took to the streets seeking democracy in one of the Arab world’s most autocratic countries, but they now want the ouster of Assad’s regime, and they have the support of much of the Western world.

The foreign minister of Turkey, a once-close Assad ally that has become disillusioned with the regime, sounded the alarm.

“I say there is a risk of transforming into civil war,” Ahmet Davutoglu told AFP, pointing to the upsurge in attacks by army defectors.

“It is now the right time to stop this massacre and, therefore, the Arab initiative is important,” he said.

“I think there could be a civil war with a very determined and well-armed and eventually well-financed opposition that is, if not directed by, certainly influenced by defectors from the army,” she told the U.S. television network NBC.

British Foreign Secretary William Hague will meet Syrian opposition representatives in London next week in what officials characterized as an intensification of contact with Assad opponents.

A Foreign Office source said Britain was “a long way off” from recognizing the Syrian National Council or Syrian opposition groups as a government-in-waiting or as the legitimate alternative to Assad.

“What they have to do is come together and form a coherent unified vision of the Syria they want of the future, particularly around the transition period and how to get there,” the source said.

Sanctions already imposed by the European Union and the United States are starting to bite: On Friday, French oil major Total said Syria had halted payments for its oil production activities. Syria’s oil exports, worth $400 million a month, a vital source of government earnings, have come to a standstill.

On the ground on Friday, at least 12 people were shot dead by security forces in several provinces, including the flashpoint central cities of Homs and Hama, activists said.

Five of the dead, including a child, were killed outside the southern town of Daraa, cradle of the anti-regime protests.

The Britain-based Syrian Observatory for Human Rights, which reported the death toll, said a 14-year-old boy was also among the dead, and that dozens were wounded nationwide.

State television said that a bomb in Hama killed three members of the security forces and critically wounded an officer, while state news agency SANA said two were killed.