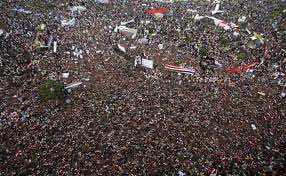 Riot police on Saturday cleared Cairo’s Tahrir Square of protesters who had camped overnight after a rally of some 50,000 people, mainly Islamists, pressed Egypt’s military rulers to transfer power swiftly to a civilian government.

Around 100 protesters had stayed in the square, where police pulled down tents and confiscated chairs and banners they had set up, Reuters’ witnesses said. Some minor scuffles occurred.

Men with long beards and women in veils predominated in Friday’s rally that appeared to be the biggest Islamist challenge to military rule since the largely secular uprising that toppled autocratic President Hosni Mubarak in February.

Liberal and leftist parties also marched to Tahrir for the rally but it was a largely Islamist affair with members of the Muslim Brotherhood’s Freedom and Justice party and their more hardline Salafi rivals, represented by several parties.

Protesters expressed their anger at a constitutional draft that Deputy Prime Minister Ali al-Silmi showed to political groups earlier this month which would give the army exclusive authority over its internal affairs and budget.

Egypt’s parliamentary elections, the first since Mubarak’s ouster and intended as the first significant step towards a civilian democratic system, are set to begin on November 28.

But it could be disrupted if political parties and the government fail to resolve the row over the constitutional proposal that would deny parliamentary oversight of the army, potentially allowing it to defy an elected government.

Over 39 political parties and groups joined Friday’s rally after negotiations broke down between Islamist groups and the cabinet over the constitutional proposal.