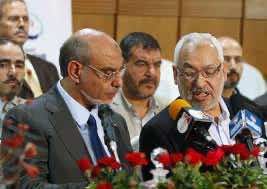 The invitation addressed by the party Ennahda to authorities in Qatar to attend the official opening of the Constituent Assembly did not please at all the other parties. It’s more the behavior of Ennahda than the quality of guests, that has been a problem. “

“The Islamists behave as if they were the real masters of the country. They do not consult with any of their allies,” a former minister said in a tone of anger. “The country is led by a president and prime minister, and it is up to them to formally invite the heads of state who want to come to Tunisia,” said one leader of the Ettakatol (Coalition) party for whom Ennahda has already started to go it alone and behaves as a hegemonic party.

In addition, having the Emir of Qatar attend the solemn opening of the Constituent Assembly has angered a majority of Tunisians, who perceive this small emirate as a “U.S. aircraft carrier,” archaic and pretentious. “It’s not the kind of friend you invite to a private party,” revels a Western diplomat in Tunis. For other leaders of parties represented in the new assembly,Qatar is neither a model at the institutional level nor at the level of political practice. The invitation is, therefore, a faux pas committed by Ennahda that, for observers, seems to find it difficult to adopt consistent positions since its landslide election victory.

Translated by Adnane Bennis and editing by Benjamin Villanti