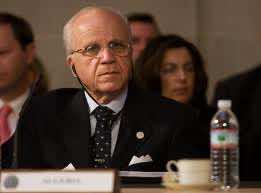 While Algerian diplomacy is struggling to weather the ramifications of its position regarding the Libyan episode, where it fumbled for over nine months, it is now replicating the same scenario with the Syrian crisis. At the gathering of foreign ministers of the Arab League, Mourad Medelci, Algeria’s foreign minister, threatened to withdraw from the meeting if Syria were to be suspended from the Arab League.

Towards the end of the meeting and under pressure from the Saudis and Qataris, Algeria voted for the suspension of Syria.

But, as he returned to Algiers, Medelci said that his country would not withdraw its ambassador from Damascus, a statement contradictory with the initial vote of Algeria.

Observers in Algiers say they do not understand anything in the behavior of the Algerian diplomacy.

According to former diplomats, the Foreign Ministry is going through its worst year. No clear conductive line seems to steer the foreign policy of a country whose diplomacy has long been one of the strongest. “Everything is decided in El Mouradia, but the President does not make quick decision and changes his mind quite often,” said a journalist who has knowledge of the inner-workings of the presidential palace.

Many voices have started venting their disgruntlement and have denounced the procrastinations of the diplomatic arms of the country, that has slipped “into indescribable chaos,” according to a former ambassador to Paris.