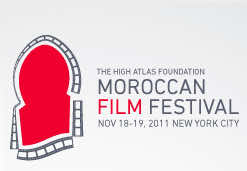 The second Moroccan film kicked off, on Friday in New York, with the participation of a galaxy of Moroccan and foreign film directors.

The festival’s opening ceremony was an opportunity to highlight the richness and diversity of the Moroccan cinema through the projection of the “La Cinquième Corde” ( the fifth corde) by Salma Bargach.

Held by the High Atlas Foundation (HAF), which was created in 2000 by a group of US Peace corps, the festival aims to celebrate the Moroccan culture and to bring the Moroccan cinema closer to the American public.

“The festival is also geared towards presenting and supporting Morocco’s human development achievements” said HAF President, Yossef Bel-Meir, who shed light by the same occasion on several contributions of the foundations benefiting cooperatives in Morocco.

He pointed to the Foundations actions which targeted mainly the plantation of trees, promoting access to drinking water and contributing to human development in rural areas.

The opening ceremony was livened up with Moroccan music such as Gnawa.

The festival will feature masterpieces of Moroccan cinema that reflects the Moroccan society and culture.

The receipts of the festival will be dedicated to help implement the HAF arboricultural project that aims at planting 1 million trees by the end of 2011.