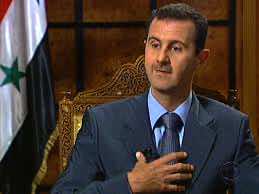 President Bashar al-Assad said Syria would not bow down in the face of mounting international pressure over his lethal crackdown on dissent,insisting Damascus must go after “armed gangs” and enforce law and order.

In an interview with the The Sunday Times, Assad said he was “definitely” prepared to fight and die for Syria if faced with foreign intervention.

“This goes without saying and is an absolute,” he told the weekly newspaper.

The president said he felt sorrow for each drop of Syrian blood spilt but insisted Damascus must go after armed rebel gangs and enforce law and order.

Assad accused the Arab League, whose deadline for Syria to stop its clampdown has expired, of creating a pretext for Western military intervention, which would trigger an “earthquake” across the Middle East.

“If they are logical, rational and realistic, they shouldn’t do it because the repercussions are very dire. Military intervention will destabilise the region as a whole, and all countries will be affected,” he said.

In an interview at the Tishreen Palace in Damascus, the 46-year-old said the solution to the violence which the United Nations says has killed more than 3,500 people since mid-March was not to pull back his troops.

“The only way is to search for the armed people, chase the armed gangs, prevent the entry of arms and weapons from neighbouring countries, prevent sabotage and enforce law and order,” he said.

“Like any other Syrian, when I see my country’s sons bleeding, of course I feel pain and sorrow,” he said. “Each spilt drop of blood concerns me personally.

“But my role as president is in deeds, not words and sorrow. My role is to think about the steps I should take to prevent more bloodshed.”

The Arab League’s deadline expired at 2200 GMT Saturday, but Assad dismissed their move.

“It’s been done to show that there’s a problem between the Arabs, thus providing Western countries with a pretext to conduct a military intervention against Syria,” he said.

In the latest violence activists said at least 17 people were killed across Syria Saturday.

Among the dead were four intelligence agents killed by gunmen who raked their car with gunfire and two mutinous soldiers who died in clashes with regular troops as the military raided the central town of Shayzar after a heavy shelling, the Syrian Observatory for Human Rights reported.

It quoted a mutinous officer as saying that two army deserters “were killed in clashes with regular troops in Qusayr” in the restive central Homs province.

With rebel troops inflicting mounting losses on the regular army, Turkey and the United States both raised the spectre of civil war and Russia called for restraint.

Russia has staunchly resisted any attempt to internationalise the crisis, fearing it could clear the way for a Libya-style military intervention under a UN mandate.

“We are calling for restraint and caution. This is our position,” Putin said a day after after his foreign minister, Sergei Lavrov, had likened the situation in Syria to a civil war.

US Secretary of State Hillary Clinton and Turkish Foreign Minister Ahmet Davutoglu both warned that the risk of civil war was real.

“I say there is a risk of transforming into civil war,” Davutoglu told AFP, pointing to the upsurge in attacks by army defectors.

Clinton told NBC news: “I think there could be a civil war with a very determined and well-armed and eventually well-financed opposition that is, if not directed by, certainly influenced by defectors from the army.”

Israeli Defence Minister Ehud Barak said he believed the Assad regime had reached “a point of no return” and that there could be a change of regime within months.

“I think that he went beyond the point of no return, no way that he will he resume his authority or legitimacy,” Barak told a defence summit in Canada.

“And it’s clear to me that what happened a few weeks ago to Kadhafi… and what happened ultimately to Saddam Hussein, now might await him,” he said.

Former Libyan strongman Moamer Kadhafi was killed on October 20 when forces of Libya’s new regime captured his hometown of Sirte. Saddam Hussein was hanged in December 2006 after being sentenced for the deaths of 148 Iraqi Shiites in the early 1980s.

The Arab League said it was examining a Syrian request to make changes to a proposal to send 500 observers to Damascus to help implement a peace deal agreed earlier this month.

Syria was told by its Arab peers to stop the lethal repression against protesters by midnight (2200 GMT) on Saturday or risk sanctions, and the Arab League has already suspended it from the 22-member bloc.

The Organisation of Islamic Cooperation said it will convene an emergency meeting next Saturday at its Saudi headquarters to urge Syria to “end the bloodshed.”

Elsewhere, dozens of people rallied outside the US consulate in west Jerusalem in support of the Assad regime, denouncing what they called a “conspiracy” against Syria.