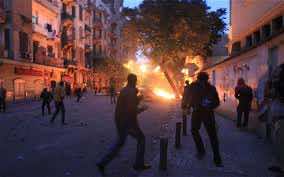 A demonstrator was killed and hundreds of people injured as Egyptian police fired rubber bullets and tear gas to break up a sit-in organised by some of the driving forces behind the Arab Spring revolt.

The dead man sustained a bullet wound to the chest, a doctor on the scene said.

A total of 676 people were also wounded in the clashes in the capital’s iconic Tahrir Square, epicentre of the 18 days of protests that ousted veteran president Hosni Mubarak in February, health ministry spokesman Mohammed Sherbini told the state MENA news agency yesterday.

The interior ministry said 40 police officers were among the injured.

“Down with Tantawi,” hundreds of protesters cried, referring to the country’s military ruler Field Marshal Hussein Tantawi, as they lobbed rocks and whatever else came to hand towards policemen who responded with heavy volleys of rubber bullets.

Sporadic clashes persisted into the evening near the interior ministry, an AFP correspondent reported. “We will never be scared again. They can shoot at us all they want,” protester Nasma Abdel Azim said.

The day began when police moved into Tahrir Square in the morning to disperse the demonstrators, who included relatives of victims of the revolt that overthrew Mubarak.

Clashes continued unabated through the afternoon and demonstrators seized a police truck which they set ablaze.

A policeman on an armoured car was shooting rubber bullets into the crowd, striking a journalist in the forehead and a Western photographer in the face, the correspondent said.

One of the protesters, Ali Abdel Aziz, said security forces beat up protesters to break up the morning sit-in. “They beat us harshly, they didn’t care for either men or women. The interior ministry must take responsibility. We have one demand, the military council must go,” said the 32-year-old accountancy professor.

Reports on Twitter and videos on YouTube showed at least two activists who had lost an eye. Organisers of the sit-in, which had gone for several days, had called for speedy trials of policemen and officials accused of involvement in the deadly crackdown that accompanied Mubarak’s abortive bid to retain his grasp on power.

Mubarak is on trial along with his former interior minister and security chiefs on charges of ordering the killings of some of the roughly 850 people killed during the uprising.