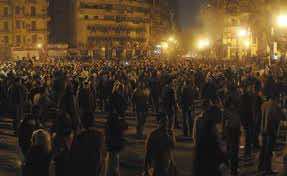 Clashes are continuing in Cairo, the Egyptian capital, between riot police and protesters demanding that the ruling military quickly announces a date to hand over power to an elected government in some of the worst unrest since the country’s revolution.

Police fired tear gas canisters and protesters threw rocks on Sunday morning as thousands remained on the streets overnight in and around central Cairo’s Tahrir square, the focal point of the 18-day uprising that toppled former president Hosni Mubarak in February.

The violence, which followed mass protests on Saturday, left at least two people dead and hundreds wounded in Cairo and other cities, stoking tensions just days ahead of the start of the country’s first post-Mubarak parliamentary elections.

The fresh protests have been triggered by a political storm over plans put forward by the military-backed government to enshrine a political role for the military in the next constitution and shield it from any civilian oversight.

“Although there has been no statement made by the military council to whether these elections will be put off or not, many here are sceptical as to how they can take place with such little security,” said Al Jazeera’s Jamal El Shayyal, reporting formTahrir Square.

“We have a single demand: The marshal must step down and be replaced by a civilian council,” said protester Ahmed Hani, referring to Field Marshal Hussein Tantawi, Egypt’s military ruler and Mubarak’s longtime defence minister.

“The violence yesterday showed us that Mubarak is still in power,” said Hani, who was wounded in the forehead by a rubber bullet.

Although the military have not made a formal statement in response to the protests, a member of the military council, Major General Mohsen el-Fangari, said protesters’ calls for change ahead of the election were a threat to the state.

“The aim of what is going on is to shake the backbone of the state, which is the armed forces.”

Rocks, shattered glass and other detritus covered most of Tahrir early on Sunday.

Several hundred protesters were camping out on the lawn of the square’s traffic island and chanting “freedom, freedom”.

All roads leading to the square were blocked by protesters who ran identity card checks on anyone attempting to enter the space.

In the northern Egyptian city of Alexandria, hundreds of demonstrators threw stones at the main security headquarters in  setting a police car on fire, to protest against a violent crackdown on demonstrators in the Egyptian capital.

The military, which took over from Mubarak, has repeatedly pledged to hand over power to an elected government but it has yet to set a specific date.

The continuing confrontation is one of the few since the uprising to involve the police, seen during February’s revolution as bastions of the Mubarak regime, which have largely stayed in the background while the military took charge of security.

There was no military presence in and around the square on Saturday or on Sunday.