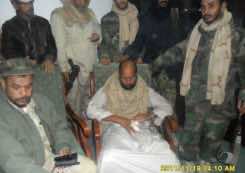 World powers have urged Libya to work with the International Criminal Court and ensure a fair trial for Seif al-Islam, son of slain leader Moamer Kadhafi who was arrested after months on the run.

Seif, wanted by the ICC for crimes against humanity allegedly committed in crushing anti-regime protests, was captured in Libya’s far-flung Saharan south early on Saturday in a trap set by fighters of the Zintan brigade.

Despite assurances by Libya’s interim leaders of a “fair trial”, images that emerged of Kadhafi been beaten and later felled by a bullet to the head when he was captured a month ago sparked a worldwide chorus of calls for Seif to be brought safely to justice.

“We are happy that this time the new authorities in Libya did not resort to summary justice for Seif al-Islam, the son of the ousted leader Kadhafi,” he said after Seif was shown alive following his capture.

Video footage showed Kadhafi’s longtime heir apparent being hauled off into captivity in a northwestern hill town after getting off a flight from the desert south where he was seized.

A fist was thrown as Seif was mobbed by a large crowd of curious onlookers, many of them veterans of the eight-month uprising, but he was spared the brutal lynching dealt out to his father.

Sporting a brown cloak and headdress, Seif showed no sign of emotion as he braved the surging spectators at the small airport terminal in Zintan, a mainly Berber town in the Nafusa mountains southwest of Tripoli that was a launchpad for the rebels in their victorious push on the capital in August.

Libya’s interim prime minister Abdel Rahim al-Kib moved quickly to give the assurance that Seif would be brought fairly to justice.

“I reassure our people and the world that Seif, and those with him, will be given a fair trial in which international rights and norms will be guaranteed,” Kib told a news conference in Zintan.

“The judicial authorities will communicate with the International Criminal Court to examine where Seif al-Islam must be tried,” he said.

“Any cooperation with international institutions is welcome,” he added. implying that they would like him to be tried in Libya.

Kib said Seif’s capture marked a “historic” day and the start of a new chapter for the north African nation.

“The arrest of Seif al-Kadhafi crowns the sacrifices made by our great people,” he said in reference to the uprising launched in mid-February that ended Kadhafi’s 42-year rule.

“We are going to show Seif al-Islam who we are — we are not some armed band, we are freedom-seekers,” he said.

The head of the Zintan brigade which arrested Seif said that Kadhafi’s favourite son asked his captors “to fire a bullet to his head and take him (dead) to Zintan.”

“Seif al-Islam was arrested at 1:30 am (2330 GMT Friday)” in the Wadi al-Ajal district, near Awbari inLibya’s south, Al-Ajmi al-Atiri told a news conference.

“We received a tip-off from one of Seif’s bodyguards. He told us he was thinking of fleeing to Niger,” Atiri said.

“We set a trap and laid in wait. Two cars turned up with six people in them, including Seif. We arrested them with little resistance.

News of Seif’s capture was greeted with celebratory gunfire in Libya’s major cities.

It came a day before the NTC was expected to name a new government and three months after Seif al-Islam was last seen in public.

A Libyan television channel, Al-Ahrar, broadcast footage of Seif heavily bearded and leaning on the end of a bed, with three fingers of his right hand bandaged and a blanket on his legs.

Atiri said the injuries came in a NATO air strike.

The urbane Kadhafi son, who was normally clean-shaven in his days at the heart of the regime, was long seen as a potential reformer from within but proved a diehard apologist of brutal repression in the face of the Arab Spring uprising.

The ICC issued warrants on June 27 against Seif al-Islam, as well as his father and Abdullah al-Senussi, the late dictator’s intelligence chief, on charges of crimes against humanity in crushing anti-regime protests.

A court spokesman said Libya had an obligation to surrender Seif but did not exclude the possibility of a trial in Libya.

“The Libyan authorities have an obligation to cooperate with the court, including with respect to the arrest and surrender of Seif al-Islam to the court as indicated in the UN’s resolution,” Fadi El-Abdallah told AFP.

But he added: “If Libyan authorities believe that a trial at national level is a better solution, they can ask that the case not be admitted in The Hague, based on the court’s complementary principle.

“If they want a trial in Libya, they must submit a request for dismissal and procedures in Libya must be conducted on the same charges as those contained in the warrant of the ICC.”

Lieutenant General Charles Bouchard, the Canadian who headed the NATO-led air war in Libya, said a fair trial for Seif al-Islam was “critical” to show the new government’s legitimacy.

Britain, France and the United States all called on Libya’s new rulers to cooperate fully with the ICC.