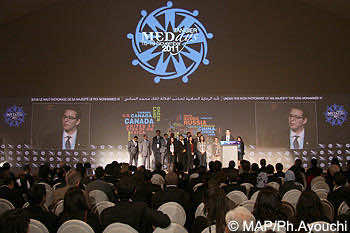 The 4th 2011 MEDays Forum ended, on Saturday, with the launch of the Tangier initiative to implement the Deauville Partnership through setting up funds to support democratic transition in developing countries.

The Tangier Initiative aims at adopting an inclusive approach to bring support to the countries eligible to the Deauville partnership; Morocco, Tunisia, Egypt and Jordan.

The Initiative also calls for upholding the financial commitments of the partnership through setting up independent multilateral investment funds dedicated to developing Arab countries.

Also in its final declaration, the Forum calls for a global financial regulation through giving central banks a larger say in overseeing financial transactions.

The declaration stresses the need for creating a Euro-Mediterranean bank or agency to finance credit insurance with a view to protecting investments south of the Mediterranean.

The document also calls for reinforcing economic integration and trade between countries of the south.

On the other hand, the document emphasizes the need for a reform of the UN governance through bolstering the role of the General Assembly and enhancing the functioning modalities of the Security Council.

The Forum also recommends enlarging of the G20 to include five non-permanent representatives for a two-year term as well as boosting a multilateral and inclusive global governance based on equity.

On human rights, the document urges the international community to condemn all violations of human rights and to ensure the protection of populations against armed violence and repression of regimes lacking democratic legitimacy.

The document calls upon the Arab League to take leadership in settling political crises in the Arab world through an unreserved support for democracy and basic rights.

According to the Forum, the Arab League should also ensure the full implementation of the decisions taken during the Arab meeting on Syria.

The document stresses the pressing need for settling the Israeli-Arab conflict within the framework of international legality and the establishment of an independent Palestinian States with its 1967 borders and Al-Quds as its capital.

In this respect, the document calls for a relaunch the Arab Peace Initiative in order to lay the ground for negotiations, urging the US to support the Palestinian bid to join the UN and to give up its decision to cut its funding of the UNESCO.