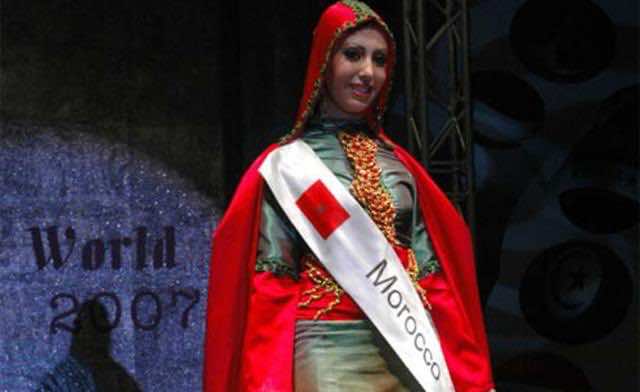 The 2012 Moroccan beauty pageant will be quite distinguishable for its adherence to the customs and traditions of a society that is predominantly religious and conservative. This is reflected in the cancellation of the bathing suit segment as well as the acceptance of veiled contestants.

The organizing committee of the Miss Morocco annual beauty pageant will this year hold the ceremony under the title “Modern and Traditional” in an attempt to stress women’s right to take part in competitions that focus on their beauty without compromising their Arab and Islamic identity.

This year’s competition, to be launched in eight Moroccan cities, will be similar to other beauty pageants around the world except that it will have a local flavor, said the members of the organizing committee.

The local dimension, they explained, will be demonstrated in two ways. It will allow contestants to wear traditional Moroccan costumes designed by both Moroccan and international fashion houses. And it will also respect the conservative dress code that reflects the traditions of Moroccan society.

Apart from the canceling of the bathing suit segment and the addition of veiled female contestants, there are other conditions contestants have to adhere to.

Contestants must be unmarried, between the ages of 18 and 25; they cannot wear contact lenses or wigs, and they must not have body tattoos or piercings except for ears.

This was seen by many observers as a move to placate Islamists and conservatives who have always described beauty pageants as “slavery marketplaces.”

However, including veiled contestants was not received well by Islamic scholars who saw the move as a way to deceive the public.

Idris al-Katani, head of the Islamic Thought Forum in the capital Rabat, says allowing veiled women to contest gives the illusion that the competition is respectable and does not violate Moroccan traditions.

“In fact, encouraging veiled women to take part destroys the last standing values of decency that some Muslim women in Morocco still uphold,” he said.

Katani argued that beauty pageants by definition depend on physical beauty and this in itself is inappropriate for Muslim women.

“This is a blind imitation of Western values that turn women into commodities and that rob them of dignity and honor.”

The organizing committee begs to differ, as its members stress that beauty and elegance are only part of the criteria according to which Miss Morocco is chosen. Other traits that are not related to physical appearance, they said, are also important like intelligence, eloquence, and general knowledge.

Miss Morocco will be chosen by both a jury and voters who can send in their choices through mobile text messages. The winner will receive a monthly salary for a whole year and several gifts from the sponsoring companies, a car, and a check whose value has not yet been determined. She will also take part in the Miss Universe competition.

In addition, Miss Morocco will adopt a humanitarian cause for which she will serve as its advocate at relevant local and international forums.