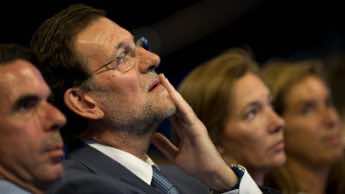 After Sunday’s landslide election victory,Spain’s Mariano Rajoy is all set to take up the country’s top job. But canSpain’s next prime minister pull his country out of its economic doldrums?

Self-effacing, dull and rather uncharismatic, Mariano Rajoy is not the kind of candidate to electrify an electorate. But on Sunday night, the 56-year-old leader of the Popular Party swept the polls in a landslide victory that saw his centre-right party crushing the discredited outgoing Socialist party.

With mounting unemployment figures and borrowing rates hovering at dangerously high levels, Spain has been gripped by a crushing financial crisis and dissatisfaction with the Socialists under Prime Minister Jose Luis Rodriguez Zapatero has been at an all-time high.

To be fair to the Socialist candidate, Rubalcaba had an almost impossible mission to win back voter confidence after Zapatero’s seven years in power. When the Socialists took power in 2004, they initially presided over a period of sustained economic growth.

But that has all changed.

Spaintoday has nearly 5 million unemployed people, a huge public debt and is home to a popular protest movement called the “Indignados” (the Indignants) that has spread across the country and sparked similar demonstrations across the globe.

The leadership change in Madrid is part of a tsunami of political shakeups that have gripped Europein the wake of the continent’s financial crisis. Rajoy belongs to a new class of European leaders – such as Italy’s Mario Monti and Greece’s Lucas Papademos – who have been charged with leading their countries through a bleak period of austerity measures.

Criticised for running a lackluster campaign, Rajoy has not minced his words on the state of the Spanish economy. In a November 8 televised debate with Rubalcaba, the Popular Party chief said Spain has never before suffered such a “grave loss of confidence” at home and abroad than under the Socialist party’s reign.

For Rajoy, the solution lies within the eurozone. “Everyone should know that for my government, the priority will be to keep the commitments made by Spain to Brussels,” he said in a bid to reassure Spain’s European partners.

Biding his time during the ‘Zapateromania’ years

Hailing from a prominent political family in north-western Spain, Rajoy has held several political posts in his native Galicia and on a national level. He has served as a deputy prime minister and interior minister under former Spanish Prime Minister José Maria Aznar.

But the top job eluded him since 2004. As the Popular Party leader, Rajoy was designated as Aznar’s successor, but the March 11 Madrid train bombings effectively crushed his hopes of becoming the country’s new prime minister.

In the hours following the attacks, Aznar’s government obstinately blamed Basque separatist group ETA for the attacks despite mounting evidence that the deadly assault was carried out by militant Islamists.

Coming in the wake of Aznar’s support for then US President George W. Bush’s unpopular war inIraq, the March 14, 2004 Spanish general election swept Zapatero to power.

Confined to the role of opposition leader, Rajoy bid his time while “Zapateromania” swept the country, handing Zapatero his second election victory in the 2008 general election.

A tactician and a political survivor, Rajoy managed to retain his position as party chief by taking advantage of the disunity within the party ranks, which include the centrists as well as those nostalgic for the right’s glory days under General Francisco Franco.

As party chief, Rajoy managed to rejuvenate the party and attempted to “feminise” a party widely considered a traditionally “masculine” party. Nevertheless, some of Rajoy’s critics worry that he will repeal some of the social reforms of the Zapatero era, particularly on abortion and gay marriage.

In the end, it was the economic crisis that boosted Rajoy and his party during the 2011 campaign season.

But the economic crisis could also lead to his undoing as prime minister. Once the excitement of an election victory dies down – and in Spain it will die down pretty quickly – Rajoy will have the unenviable task of reconciling spending cuts with generating growth and jobs. With popular protests reaching fever pitch in many European countries, Rajoy biggest challenge may just be to maintain social cohesion in his economically troubled country.