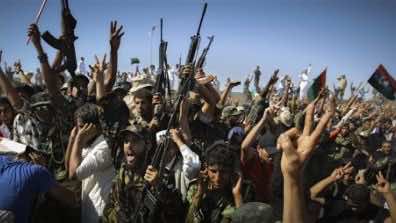 Clashes between rival gangs are increasing in Libya. Not a day passes without deaths and injuries. Since the death of Muammar Gaddafi, the NTC finds it hard to impose itself.

If at the international level it is the sole interlocutor of foreign powers, within the country the interim government, however, is struggling to assert its authority. The veteran groups, heavily armed and fully idle, spend all day hassling and fighting against each other for control of trafficking of alcohol and cigarettes.

The most violent clashes often occur around Tripoli. Today, officials of the NTC mandated tribal leaders and Islamist fighters to convince the armed groups to leave the cities.

For now, the efforts of the tribal leaders do not seem to have been met with success. “People do not want to travel between cities if they are not accompanied by armed men whom they trust,” said one North African businessman, who has already visited Libya several times.

Restoring security in the country will be a real challenge for the new government that is to be established soon. On the advice of the Western powers, the NTC wants to restore a national army. The only problem is knowing who to incorporate into the army.