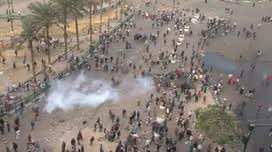 The death toll from three days of clashes between protesters and authorities in Cairo’s Tahrir Squarehad risen to more than 20 by Monday, potentially jeopardising the November 28 parliamentary elections -Egypt’s first in 30 years.

Clashes between police and protesters in Cairo’s Tahrir Square erupted for a third day Monday while the death toll rose to 22, amid fears Egypt’s first vote since Hosni Mubarak’s ouster could be affected.

Police and military forces sporadically used batons, tear gas and birdshot to try to clear the central square of thousands of protesters demanding that the ruling military cede power to a civilian authority.

By mid-morning Monday large crowds were again streaming to Tahrir, the symbolic heart of demonstrations that toppled Mubarak in February, correspondents said.

The health ministry said 22 people had died in the violence, kicking off a violent countdown to the country’s November 28 parliamentary elections, the first since the end of former president Mubarak’s 30-year-rule.

“The deaths in (Cairo’s)Tahrir Square and several provinces has reached 22,” since clashes broke out on Saturday, the health ministry said in a statement carried by the official MENA news agency.

Hundreds have also been injured during the protests that broke out in Cairo,Alexandria and the canal city of Suez.

The clashes first erupted on Saturday, a day after large crowds staged a peaceful anti-military mass rally at the square, resuming on Sunday and carrying through the night into Monday morning, witnesses and television footage showed.

Police and troops on Sunday seized the square only to be beaten back by protesters who retook it later, as had also happened on Saturday.

An AFP reporter said late on Sunday that on one street protesters were throwing stones and petrol bombs at military armoured personnel carriers and riot police.

He said military police had responded with mostly shotgun fire and rubber bullets. When there was steady fire some protesters began to run while others chanted “Hold fast! Hold fast!” and “We won’t leave!”

There were heavy clashes on side streets leading to the interior ministry as protesters chanted “The people want to topple the field marshal” — Hussein Tantawi, Mubarak’s long-time defence minister who heads the ruling military.

In the Mediterranean city of Alexandria, a funeral procession Sunday for one of the victims degenerated into clashes with the police who fired volleys of tear gas at mourners, state news agency MENA reported.

In the canal city of Suez, troops fired live rounds into the air to stop protesters from storming a police station in the city centre, also on Sunday.

Protests also broke out in the central cities of Qena and Assiut, a security official said, adding that 55 people had been arrested nationwide.

Egypt’s cabinet, which held crisis talks on Sunday for several hours before moving en masse to the headquarters of the ruling Supreme Council of the Armed Forces (SCAF) for another meeting, said in a statement that next week’s parliamentary elections would go ahead.

The SCAF, in a statement read out on state television, said it “regretted” what was happening. It said it was committed to the elections timetable.

Earlier Mohsen al-Fangari, a member of the council, insisted the election would go ahead as planned and that the authorities were able to guarantee security.

“We will not give in to calls to delay the elections. The armed forces and the interior ministry are able to secure the polling stations,” Fangari told a talk show on the Egyptian satellite channel Al-Hayat.

They submitted a new transition roadmap which would see an elected constituent assembly draft a constitution and then a presidential election would be held, followed by parliamentary polls.

The street protests have seen the return of riot police, the branch of the interior ministry most used by the Mubarak regime in its crackdown against protesters but rarely deployed since.

Friday’s rally, which grouped Islamist and secular activists, called on the military to hand power to a civilian government. It also demanded more control over the constitution the new parliament is to draft.

Protesters called for the withdrawal of a government document that proposes supra-constitutional principles, which could see the military maintain some control over the country’s affairs and keep its budget from public scrutiny.

The military says it will hand over power after a presidential election, which has yet to be scheduled.