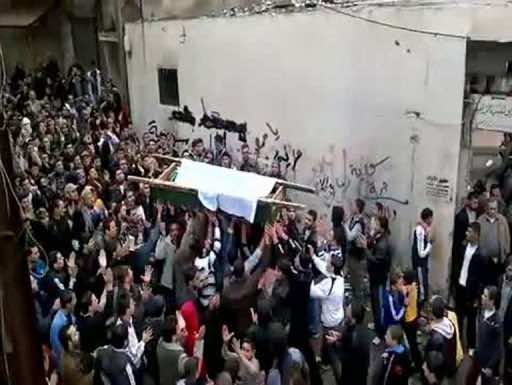 Buses carrying Turkish pilgrims came under attack near the Syrian city of Homs as at least four more people were killed Monday in a regime crackdown in the same flashpoint region, reports said.

The latest violence came as Turkey’s Prime Minister Recep Tayyip Erdogan warned Syrian President Bashar al-Assad his days were numbered and that he could not stay in power indefinitely through the use of military power.

And in a signal of support for groups seeking to oust Assad, Foreign Secretary William Hague met representatives of Syria’s opposition for the first time, although he said it was too early for Britain to formally recognise them.

Russia for its part accused the West of provocative behaviour in the Syrian crisis, saying Western countries were telling the opposition to forget dialogue with the embattled president.

Two people were injured when “Syrian soldiers” attacked the Turks travelling by bus back from the Muslim hajj pilgrimage in Saudi Arabia after taking a wrong turn near Homs, said the private CNN-Turk television station.

“We confirm that an attack took place in Syria,” a Turkish foreign ministry official told AFP, without elaborating.

“Military and security forces open(ed) fire on two buses of a Turkish company heading towards Turkey via the Bab Hawa border crossing, injuring some of the Turkish travellers,” said the LCC.

One pilgrim and the bus driver were injured, Turkish media reported.

“We were a convoy of eight to nine buses. First we saw a red car carrying four people. They fired at us from there,” injured pilgrim Cemil Karli, 50, told Anatolia news agency.

“We don’t know who attacked and why… We could have died,” he said, adding the buses managed to continue through to the Turkish border.

Stepping up the pressure on one-time ally Assad, Erdogan said: “You can remain in power with tanks and cannons only up to a certain point. The day will come when you’ll also leave.”

“Someone shows up and says ‘I’ll fight and die.’ Against whom will you fight? Will you fight against your Muslim brothers you rule in your country?” asked Erdogan.

The Turkish premier was referring to an interview with Assad published in London’s Sunday Times in which the Syrian leader vowed to fight and die for his country if faced with foreign intervention.

The reported bus attack coincided with deadly early morning raids by Syrian security forces on Homs, the Syrian Observatory for Human Rights and LCC both said in statements.

“Two people were killed and seven others were wounded in Homs while two others died and eight were wounded in (nearby) Qusayr by gunfire during raids on Monday morning by the army and security forces,” said the Observatory.

The LCC said as many as seven people, including a Saudi national, were killed, including six in Homs, and that a 65-year-old man who died from “random shooting by security forces” in Karnaz.

However his Iraqi counterpart, Hoshyar Zebari, echoed US, Russian, and Turkish fears of the bloodshed in Syria escalating.

“Concern is from the conflict becoming armed or sectarian, which might lead to a civil war,” Zebari told reporters in Qatar. “We refuse this due to its outcomes on the region.”

Despite threatened sanctions, Syria let pass a deadline at midnight on Saturday to halt what the Arab League has called its “bloody repression” by pulling its troops from the street and engaging in talks with the opposition.

At least 24 more people were reported to have been killed at the weekend, adding to the UN figure of the more than 3,500 deaths in the crackdown since mid-March.

The 22-member Arab bloc said its foreign ministers would hold crisis talks on Syria in Cairo on Thursday, after rejecting changes proposed by Damascus to its proposal to send an observer mission to the country.

The Arab League also came in for criticism on Monday from Russia, a longtime ally of the Syrian regime.

Foreign Minister Sergei Lavrov complained that while the Arab League had called for a halt to violence, Western capitals had been telling the opposition to refrain from dialogue with Assad.

In London, Britain’s top diplomat said after meeting with members of Syria’s opposition that he had appointed an “ambassador-designate to conduct relations with them.”

But Hague added that Britain was not yet ready to formally recognise the opposition because they lacked complete unity, were not in control of any territory, and “the international community has not yet reached that point.”