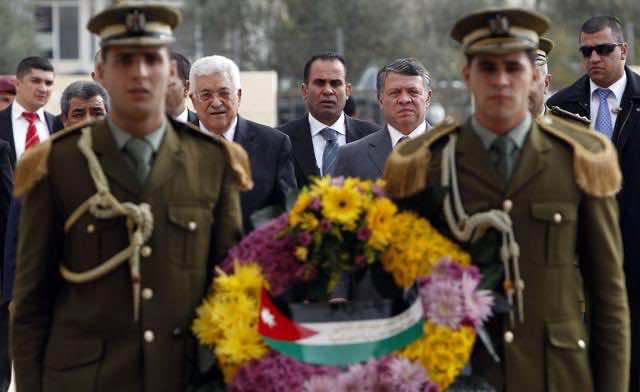 Jordan’s King Abdullah II held talks in Ramallah on Monday with Palestinian president Mahmud Abbas on his first visit to the West Bank in more than a decade.

The rare visit came just days ahead of a key summit between the rival Palestinian movements Fatah and Hamas, which are looking to cement a stalled unity deal that has drawn fierce opposition from Israel and Washington.

It was the first time the monarch visited the West Bank’s political capital since August 2000, and came before the Palestinian leader was due in Cairo later this week to meet exiled Hamas chief Khaled Meshaal.

But officials said little about the reasons behind the high-level visit, which saw the Jordanian monarch flying in by helicopter for a brief stay of little more than two hours.

“This was an important and historic visit with a message of support,” Abbas told reporters after the king’s departure, without revealing what was discussed.

“The meeting with his majesty the king is a continuation of our dialogue,” Abbas said, noting that the talks also came shortly before Abdullah travels to Europe and the United States.

“Israel’s settlement policies obstruct peace effort. They do not help in building trust between the Palestinians and Israelis,” Jordan’s state-run Petra news agency quoted the king as telling Abbas before returning to Amman.

Speaking to reporters while the two leaders held closed-door talks, Jordanian Foreign Minister Nasser Judeh expressed support for both the Palestinians’ UN membership bid and for moves to cement a unity deal between Hamas and Fatah.

“The king has always said that strength comes from unity of the Palestinian front,” he said.

Standing beside him, Palestinian foreign minister Riyad al-Malki said reconciliation was of the greatest importance. “For us there is no greater interest than reconciliation and the end of the division,” he said.

Earlier, Abbas adviser Nimr Hammad said the two sides would discuss “all the political developments between us and the international community in order reach a common Palestinian-Jordanian understanding on the issues.”

Talks had been expected to touch on the Palestinian bid to secure full state membership at the United Nations, and on the upcoming Hamas-Fatah meeting in Cairo — both of which have met with strong US and Israeli opposition.

Under terms of their unity deal, Fatah and Hamas were to piece together an interim government of politically unaffiliated technocrats who would prepare for presidential and legislative elections within a year.

But the caretaker government was never formed, with the two sides bickering over its composition and over who would take up the role of premier.

However, the two factions appear to have reached some form of agreement which is likely to be made public after they meet in the Egyptian capital, Palestinian officials say.

Abdullah paid his first visit to the Palestinian territories in May 1999, just months after being crowned king, meeting the late Yasser Arafat in Gaza. In April 2000, he made a first visit to Ramallah and returned four months later.

A senior Israeli official, who said they were not informed of Abdullah’s plans, welcomed the latest West Bank visit.

“We have repeatedly called in the past for Arab leaders to travel to Ramallah in order to strengthen the peace process. Unfortunately, almost none of them have come,” he told AFP on condition of anonymity.