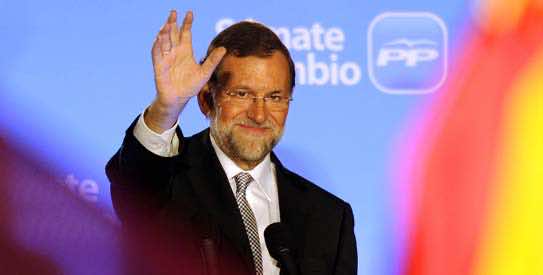 Despite a thumping election win, Spain’s right is powerless in the face of a sovereign debt crisis battering the entire eurozone, analysts warned on Monday.

The decisive power, they said, lies with the European Union. Financial markets were unimpressed by the victory for 56-year-old conservative leader Mariano Rajoy’s Popular Party, which secured the biggest winning margin in its history.

On Friday, Rajoy had pleaded in vain with the markets for a breathing space of “at least half an hour” to confront the crisis.

The big problem for Spain is the deficit, said Edward Hugh, independent economist based in Catalonia.

The conservatives have vowed to implement harsh austerity measures to meet Spain’s promise of cutting the public deficit from 9.3 of gross domestic product last year to 4.4 per cent of GDP in 2012.
“Rajoy is obviously going to address the issue,” Hugh said.

“The problem is how he can do it because Spain is going into recession now, not an expansion, so cutting savagely now really only sends the Spanish economy off in the direction of where Portugal is,” he added.

“Spain has got all the problems it had; none of them has been resolved.”Spain cannot resolve the crisis and repair the damaged balance sheets of its banks without help from the European Central Bank, Hugh said.

“It is not unreasonable that market participants start to question how deep the German commitment to maintain the euro really is when it comes to putting money on the table,” he said.

“Until they put some money on the table this is not going to stop.” Financial markets were not reacting to the election after months of opinion pols predicting the ruling Socialists’ defeat, said Soledad Pellon, analyst at IG markets.

“The change of government is a positive point, because we think it will take stronger measures,” Pellon said.

But “now we don’t depend only on ourselves, we depend on European decisions,” the analyst said, adding that the solution for the single currency region lay with the European Central Bank.

“What is really important now is to know if the ECB will agree to lend to countries in need,” she said.
Rajoy faces a daunting task in a country suffering a 21.5-percent jobless rate and the threat of a recession at the start of 2012 after zero economic growth in the third quarter.

Moec predicted Rajoy would push for faster bank restructuring, noting that one of his advisors had called for the creation of a “bad bank” to pool problem loans, an option that would likely need European financing.

The conservatives would probably also seek deeper reform of the Spanish labour market and a sharp cut in spending, the Deutsche Bank analyst said in a report.

But Barclays Capital economist Antonio Garcia Pascual said even rapid action by a Popular Party government may not be enough to stabilise Spanish sovereign debt.

Neither the International Monetary Fund nor Brussels’ bailout mechanism, the European Financial Stability Facility, had enough money to calm market concerns over Spain and Italy, he said.
The answer lay with the European Central Bank, he said.

“We see little practical alternative to a strengthened commitment by the ECB to act as lender of last resort.

Further pressure on the sovereign bond markets will require the ECB to step up unconventional policies in order to help the EFSF and IMF to stabilise stressed but solvent sovereigns like Spain.”

Poland’s finance minister said meanwhile that the European Central Bank must intervene “massively” to buy the bonds of debt-wracked eurozone countries otherwise, Europe faces a catastrophe that could lead to war.

Jacek Rostowski, whose country holds the rotating EU president, told German daily Frankfurter Allgemeine Zeitung: “We have a hideous choice … either a massive intervention from the ECB or a catastrophe.”