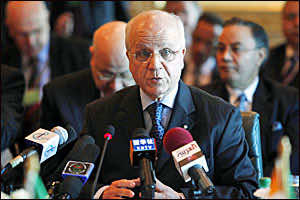 After meeting on the side-lines of an Arab-Turkish co-operation forum, Moroccan Foreign Minister Taieb Fassi Fihri and his Algerian counterpart Mourad Medelci discussed the possibility of improving bilateral relations and advancing the Arab Maghreb Union process.

“Very soon, we will find the path that leads us to something we all dream of, not only bilateral relations between Algeria and Morocco, but also this ambition we have for the Maghreb,” Algerian Foreign Minister Mourad Medelci said.

New bilateral talks “will enable us to… take more time to share information on our own challenges and concerns, and to have better understanding”, Medelci said.

Both countries, Medelci continued, “can quickly reach ways that will lead us to the things that we all aspire to, especially bilateral relations between Algeria and Morocco, and the ambition we share as Maghreb peoples to build the Maghreb Union”.

Moroccan Foreign Minister Taieb Fassi Fihri said that the two sides had agreed on a “roadmap” to enhancing Moroccan-Algerian relations.

According to Fassi Fihri, the two nations would build on recent collaboration on the issues of agriculture and energy. “Today, we decided to expand this co-operation to include other sectors,” he said.

Developments taking place in the Arab region, especially in Libya and Tunisia, call for giving more importance to relations between Rabat and Algiers in the framework of a united Arab Maghreb, the Moroccan minister said.

Algeria and Morocco now believe that “the meeting of the Ministerial Council of Arab Maghreb Union has become an urgent matter”. Algerian Foreign Ministry spokesperson Amar Belani said in a press statement released on Thursday.

The two sides agree that “there is an urgent need to hold a meeting of the Ministerial Council of Arab Maghreb Union to evaluate the situation and determine available opportunities for Maghreb cooperation and integration”, Belani said.

Reforms that have already been initiated “help respond to the legitimate demands of their two peoples and… enhance stability in their two countries and the entire region”, he added.

The Algerian-Moroccan meeting comes just one week after Morocco’s King Mohammed VI gave a speech on the anniversary of the “Green March”.

In his speech, the monarch invited Algeria to co-operate in building “a new Maghreb order” that would be a “real impetus for Arab union” and ensure “stability and security in the Sahel and Sahara region”. He confirmed Rabat’s willingness to work with Algeria, which he described as “a sisterly country”, to overcome differences.

Algerian Minister for Maghreb and African Affairs Abdelkader Messahel also recently stressed the importance of joint action in view of challenges in the region in terms of the important developments and changes on all levels.

“Algeria is still committed to building the Arab Maghreb Union, which is dictated by neighbourly relations, common fate, and requirements for joint action in view of challenges in this region of the world,” Messahel said in a speech in the opening of the 10th round of the Algerian-Mauritanian follow-up committee.