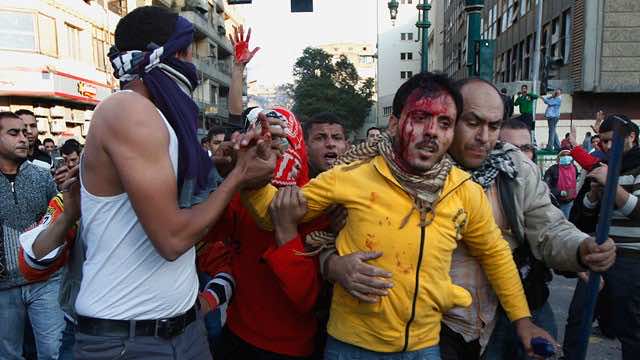 With some of the worst clashes since its revolution—and at least 20 protesters dead—Egypt is in danger of being lost. Meanwhile, Islamist groups like the Muslim Brotherhood continue to prepare for the November 28 elections. With an unparalleled electoral machine, they will likely dominate. Two of my chapters in our new Brookings book—The Arab Awakening—focus on the rise of Islamists and the state of reform in Egypt. The subtitle of the Egypt chapter is “The Prize,” which I think is appropriate. It’s a cliché by now, but it is difficult to overstate the importance of “getting Egypt right.”

Earlier today, I was in Tahrir Square, this time transformed into a war zone, with heaps of rubble, barricades, and tear gas fumes. The mounting tension and anger is the product of a ruling military council that has woefully mismanaged the country since it assumed power on February 11. But, this time, what is important is not only the scale of violence but the fact that it is happening now. Elections are scheduled to be held next week. The calls for either boycotting or postponing elections have grown among some in the opposition.

It is easy to imagine a spiraling of unrest and violence if elections are perceived as illegitimate by a significant number of Egyptians or, worse, delayed altogether. Since its revolution, Egypt has not had even one national body with real legitimacy. Legitimacy requires elections, which is why the upcoming polls are so critical for both Egyptians and everyone else who wishes to see Egypt move toward democracy and some modicum of stability.

One could list the mistakes and miscalculations Egypt’s military council has made. They were not trained to govern. Often, it seems as if they are making it up as they go along. But if much of the blame lies with their failures, at least some of it lies with the international community and particularly the United States—one of Egypt’s closest allies and its largest single donor—for failing to think creatively about the role it can and should play.

To their credit, President Barack Obama and Secretary of State Hillary Clinton have publicly urged the military to loosen its grip on power, warning that instability may arise if it does not. But private and public exhortations no longer suffice, and the stakes are simply too high to just muddle through. The United States, the European Union, as well as rising regional powers like Turkey should coordinate positions and state their unequivocal support for a timely transfer of power to civilian leadership.

So far, U.S. leverage has not appeared to work with Egypt’s military rulers. This is at least partly because they do not believe the Obama administration will withhold, or even credibly threaten to withhold, the $1.3 billion of annual military assistance. That amount makes up at least 20 percent of Egypt’s military budget. It is time—a week before landmark elections—for the United States to condition assistance on a clear timetable. That means that presidential elections cannot happen in late 2012 or in 2013, as is now the case, but significantly sooner, preferably in April. This must be a red line.

Egypt, though, is just one flashpoint among many. Other countries—which have seen revolutions, near-revolutions, and failed revolutions—are struggling with their own “transitions,” or threatening to fall apart altogether. Our book looks at nearly all the major Arab countries and, importantly, the role that outside powers are playing. In another chapter titled “Making Reform Credible,” I and coauthors Ken Pollack, Stephen Grand, and Sarah Yerkes consider creative and practicable ways for the United States and its allies to use their power and influence to support Arab democratization.

The Arab Awakening cannot be reversed but it can be undermined—at great cost to the United States and, of course, the courageous Arabs who are fighting, and dying, for freedom and dignity. In the shadow of Egypt’s elections, now is a good time for all of us who care about the region to reflect and—more importantly—to act.