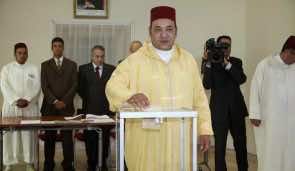 Despite the general smoothness of the constitutional reform process, the February 20th Movement kept its pressure in the streets in order to signal to the power holders that they needed to heed their demands. However, the commission appointed by the King to propose constitutional amendments did not only face challenges from the protesters but also from political parties. Mohammed Tozy, a political science scholar and member of the commission in charge of drafting the new constitution, said that “the project of the new constitution has addressed the issue of the civil state” adding that “ pressures exerted by the Unicity and Reform Movement (the religious wing of PJD) and the threats of Benkirane, the Party’s General Secretary, and the statements of a prominent leader in the Istiqlal  Party managed to nip it in the bud”.   We can read in this statement that some conservative forces in the country put all their weight on the commission to obstruct a constitution that would have been far more advanced than the one Moroccans were asked to vote for in July.

One question comes to mind regarding the challenges ahead of the sound implementation of the  provisions contained in the new constitution. We can briefly quote Professor Mennouni himself in an interview with L’Economiste in which he specifically addressed the issue of political elites in the country. When asked by L’Economiste whether this current political class will be able to carry out the provisions of the new constitution, Professor Mannouni’s answer was that “the constitutional text involves a bet. It is the transformation of the current political elite, if not the emergence of elites in the near future that will be in line with the openings granted by the new Constitution. These elite should take ownership of these openings so that all the potentialities of the draft Constitution are externalized. The bet is not unfounded. Constitutionalizing the relationship between the exercise of responsibility and accountability should pave the way for a more open less controlled political game, involving uncertainty and therefore the competition between political parties and forces. These players will be encouraged to train activists, choose the best, strive for efficiency, in addition to setting themselves goals and results. It will take time but we may come to some sort of correspondence between the constitutional text and the political profile of the political elite”. This is an insightful comment that might indicate the existence of a deep awareness that there is a lot of work that needs to be done in the future in terms of the renewal of the political elites in the country. A new political elite that can embody the aspirations of the Moroccan people and rectify the spirit of the reform oriented new constitution.

Civil society has many roles to play in the months and years to come in order to keep the democratic momentum of the country, and also keep conviction alive among the youth that democracy is a national need. Democracy does not need regimes; regimes need democracy because it is their only way to stay abreast of the legitimate aspirations of their people and be responsive to them. The highly dynamic and active Moroccan civil society can help in implementing the new constitution and protecting this achievement through: playing their role of watchdog, doing more grassroots activism against corruption and political malpractice, spearheading the political cultural change, fighting all forms of abuse of power and advocating for social justice in the country.

Will Morocco develop a democracy in the wake of November 25th elections? The answer to that is contingent on the behavior of the political actors/elites and their work to build on the positive platform laid down by the new constitution.

This is from the text of Brahim El Guabli’s presentation at the panel discussion on Moroccan Elections organized by MWN and Middle East Institute at Columbia University.