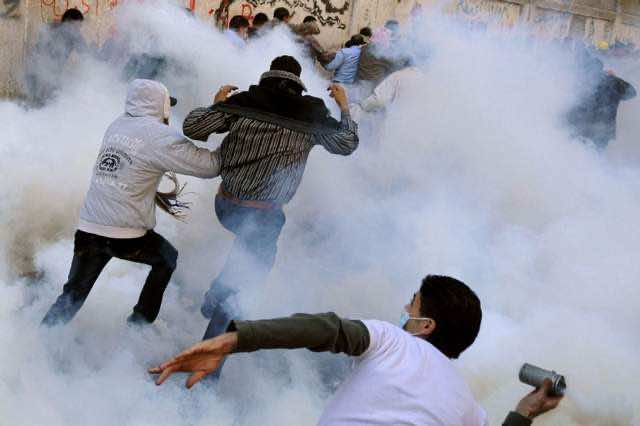 Egyptian activists called for a huge turnout in protests on Tuesday to put an end to rule by the military which also saw its authority challenged by the resignation of the civilian cabinet, casting uncertainty on elections due next week.

Some 20,000 defiantly demonstrated in Cairo’s Tahrir Square overnight despite the deaths of at least 33 since Saturday. But the protests have yet to attract the hundreds of thousands who toppled President Hosni Mubarak in February.

“The people want the fall of the marshal,” protesters chanted, referring to Field Marshal Mohamed Hussein Tantawi, Mubarak’s defence minister for two decades and head of the army council.

“This land belongs to Egyptians. It is not for sale and does not need any guardians,” one banner read. “All Egyptians demand an Egypt run by civilians,” another said.

With people huddling under blankets to shelter from the cold, and others gathering for breakfast around street vendors, the protesters complained they were being penned in by police in Tahrir Square.

“They are trying to limit the space we can move in,” protester Gamal el-Hawy said. “They want to trap us inside the square, to hurt our morale and they are doing it inch by inch.”

The ruling council late on Monday urged calm and called for crisis talks with political forces to find a way forward. The council voiced its “deep regret for the victims in these painful incidents”, state news agency MENA said.

“It called on all sections of the nation to show the greatest degree of self-restraint so that the matter does not lead to more victims and casualties,” the agency added.

The military council did not say whether it would accept the resignation of the cabinet, tendered on Sunday. A military source said it was seeking agreement on a new prime minister.

The resignation of the cabinet, in office since March, was another blow to the military council’s authority and casts further doubt on Egypt’s first free parliamentary elections in decades, which are due to start next Monday.

Clashes flared in side-streets near Tahrir. Witnesses said looters, not necessarily connected to the protests, had attacked the American University in Cairo and other buildings.

Many demonstrators condemned the military’s call for talks.

“All the military council is saying now makes absolutely no sense. They kill us and then say they want to investigate the incident. I want to understand how can they be party to the battle and at the same time be the arbitrator,” said Mohamed Sobhy, a 30-year-old translator.

Security forces also battled about 4,000 demonstrators in the port city of Ismailia on the Suez Canal, witnesses said. Two protesters were killed there, medical sources said.

Some 5,000 people surrounded a security headquarters in the northern coastal city of Alexandria and police responded by firing live ammunition, witnesses said. The state news agency MENA said 40 security officers were injured in the clashes.

Medical sources at Cairo’s main morgue said 33 corpses had been received since Saturday, most with bullet wounds. The Health Ministry put the toll at 24 dead and 1,250 wounded.

Army generals were feted for their part in easing Mubarak out, but hostility to their rule has hardened since, especially over attempts to set new constitutional principles that would keep the military permanently beyond civilian control.

The violence casts a pall over the first round of Egypt’s staggered and complex election process, which starts on Nov. 28 in Cairo and elsewhere. The army says the polls will go ahead.

“The January 25 revolution is continuing and there are attempts to run it off its course and there are those that are pushing it in the direction of chaos. That is why these protests have started,” presidential candidate Amr Moussa told Al-Hayat Television.

Islamist presidential candidate Hazem Salah Abu Ismail, who had joined the protests in Tahrir Square, described the military council’s apology for the deaths of protesters as worthless. “I call on them to step down.”

The United States called for restraint on all sides and urged Egypt to proceed with elections despite the violence.

“The United States continues to believe that these tragic events should not stand in the way of elections,” White House spokesman Jay Carney said.

European Union foreign policy chief Catherine Ashton echoed that message and said the EU was keen to monitor the polls.

“The Egyptian authorities have been very clear that they wish to conduct these elections themselves. We believe it would give credibility to them to have international observation,” she told British lawmakers in London.

U.N. Secretary-General Ban Ki-moon deplored the loss of life and called on the transitional authorities “to guarantee the protection of human rights and civil liberties for all Egyptians, including the right to peaceful protest”.

In an apparent sop to protesters, the army council issued a law to bar from political life “those who work to corrupt political life and damage the interests of the nation”.

The announcement was unlikely to satisfy political parties and activists who have called for a blanket ban on former members of Mubarak’s now defunct National Democratic Party.

“The council is out of step with the people,” said activist Mohamed Fahmy, describing the new law as a “meaningless move”.

Some Egyptians, including Islamists who expect to do well in the vote, say the ruling army council may be stirring insecurity to prolong its rule, a charge the military denies.

Political uncertainty has gripped Egypt since Mubarak’s fall, while sectarian clashes, labour unrest, gas pipeline sabotage and a gaping absence of tourists have paralysed the economy and prompted a widespread yearning for stability.