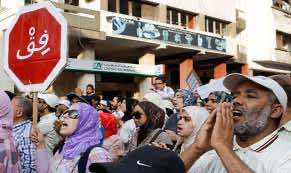 Moroccan opposition activists are stepping up their calls for a boycott of this week’s parliamentary election, saying it will produce a corrupt assembly unwilling to implement the radical reforms they believe the country needs.

Inspired by the “Arab Spring” uprisings across the region, the activists have been staging protests for months. Friday’s election is seen as a test of the commitment by Morocco’s ruler, King Mohammed, to move his kingdom closer to democracy and cede some of his powers to elected officials.

The monarch backed constitutional changes and brought the vote forward by 10 months as part of a plan by the palace to bring fresh faces into a government associated in the minds of many Moroccans with corruption.

But the pro-boycott camp, led by a group called the February 20 Movement, says the vote just promises more of the same.

“We are calling for a boycott because the constitution is not democratic and … allows the royal court to dominate the military, the executive, the religious and the judicial authorities,” said Najib Chawki, an activist with the February 20 Movement.

“The interior ministry continues to control these elections, which saw the return of some politicians infamous for their involvement in graft and corruption as candidates,” he said.

The movement staged protests on Sunday in cities across Morocco, gathering about 10,000 people in the northern city of Tangier and smaller numbers in Casablanca and Rabat.

The boycott call is unlikely to derail the election. The February 20 Movement and its allies represent only one segment of the population. Meanwhile, the majority of Morocco’s 32 million population is disinterested in politics and reverential towards the king.

The main contest in the vote is between moderate Islamists, who are loyal to the palace, and a coalition centred around a party founded by a friend of the king.

The risk for the palace is that a low turnout will cast doubt on its claim to be moving towards democracy and will embolden its opponents who call for more radical reform.

The palace will hope to improve on the official turnout for the last parliamentary election in 2007, which at 37 percent was the lowest in Moroccan history.

The king has exhorted Moroccan citizens to go to the polls.

“Broad national mobilization is essential to meet the challenge of ensuring the success of the elections, so that they are free, fair and competitive,” the monarch said in a speech earlier this month.

The authorities have also taken tougher measures to try to blunt the impact of the boycott campaign.

Several activists, mostly from February 20 Movement, have been detained and interrogated by the police for distributing tracts that call for a boycott.

Moroccan law does not explicitly ban calling for a boycott, and it was not clear on what charges the activists had been detained.

The February 20 Movement’s boycott campaign has been joined by Justice and Charity, an Islamist group that has been banned by the government.

“What purpose do these elections serve? Are they really a mechanism for the devolution of power?,” the group asked in a statement. “The political, constitutional and legal contexts empty the polls of any democratic essence,” it charged.

Two small left-wing parties, which between them have a handful of seats in the outgoing 325-seat parliament, are also sitting out the vote.