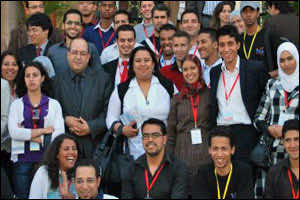 About 120 activists from across the Arab world gathered in Casablanca last week for a four-day youth empowerment event.

Attendees were picked based on their involvement in community-based development activities. The goal of the meeting, which ended on Thursday (November 17th), was to help young activists find solutions to development challenges, discuss opportunities presented by economic growth, the environment, educational systems and young people’s involvement in managing those sectors.

The meeting, organized by USAID in collaboration with Younes El Jaouhari, Director for Youth, Children and Women’s affairs at the Youth Ministry, enabled young people to exchange their views in a calm and supportive ambiance.

Participants benefited from training on how to raise awareness about issues and present their views, said Anas Akkad, from Morocco. He added that young people have always been willing to get involved in different activities, whether political or social, even if society kept them on the margins.

A young woman from Tunisia, Rim Krioui, was equally enthusiastic. She was able to network and share thoughts with other on how to set up projects which would enable young people to play a prominent role in development.

Arab youths have changed, and so have their needs, El Jaouhari said. They are now players with a direct impact on events in the Arab world, he added.

The future of Arab countries will depend on the place given to young people and their ability freely to express their opinions in all phases of change, according to El Jaouhari. He commented that youth movements in the Arab world are not only political in nature, but also economic and social.

“Young Arabs have sought new management methods and new ruling elite, alongside economic development,” the official said. “They have demanded radical social change to bring living conditions in line with modern everyday needs. This involves not just a political revolution, but an economic and social revolution too.”

He insisted that Morocco had created a climate favorable to political and economic change, particularly by bringing forward the legislative elections to promote change.

John Groarke, the Director of USAID in Morocco, agreed, saying that Morocco has made considerable efforts to help young people and women. These efforts lie behind the event in Casablanca, he added.

Nicole Golden, a US advisor on youth issues, highlighted the importance of young people benefiting from local opportunities and driving development programs, along with a need to heed their opinions in order to keep pace with the development challenges facing them.