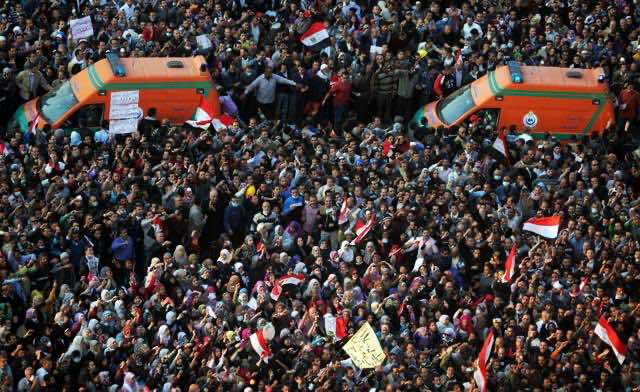 Egypt’s ruling military council offered on Tuesday to transfer power to a civilian by July next year in a dramatic attempt to placate protesters and defuse a political crisis. But the major concessions were immediately rejected by tens of thousands of protesters in Cairo’s iconic Tahrir Square threatening a “Second revolution.”

The military council, in power since Hosni Mubarak was overthrown on Feb. 11, also agreed at a meeting with politicians to accept the resignation of Prime Minister Essam Sharaf’s cabinet and to replace it with a national salvation government within days to steer Egypt to civilian rule.

The military also agreed to hold presidential elections before the end of June 2012, a vote the ruling council has deemed the final stage necessary for transferring power.

“We agreed on July as the month to transfer power to a civilian president,” one participant, Emad Abdel Ghafour, head of the Salafi Islamist Nour (Light) Party, told Reuters.

Aboul-Ela Madi and Mohammed Selim el-Awa, two politicians who attended a five-hour crisis meeting with the military rulers, said the generals accepted the resignation of Prime Minister Essam Sharaf’s government and will form a “national salvation” Cabinet to replace it.

Previously, the military rulers had floated late next year or early 2013 as the timetable for transferring power.

The military’s concession came less than a week before the first parliamentary election since the ouster nine months ago of longtime authoritarian ruler Mubarak. The elections are staggered over three months.

“We are not leaving, he leaves,” chanted the protesters, demanding that military ruler Field Marshal Hussein Tantawi and his council of generals immediately give up power to a civilian transitional authority.

“The people want to bring down the field marshal,” they shouted in scenes starkly reminiscent of the uprising that ousted Hosni Mubarak nine months ago.

“Our demands are clear. We want the military council to step down and hand over authority to a national salvation government with full authority,” said Khaled el-Sayed, a member of the Youth Revolution Coalition and a candidate in the upcoming parliamentary election. The commander of the Military Police and the Interior Minister, who is in charge of the police, must be tried for the “horrific crimes” of the past few days, he added.

“This is the maximum we can reach. The (Tahrir) square is something and the politics is something else,” Madi told The Associated Press in a telephone interview. He and Al-Awa were among 12 political party representatives and presidential hopefuls who attended the meeting with the military council. Not all parties were represented.