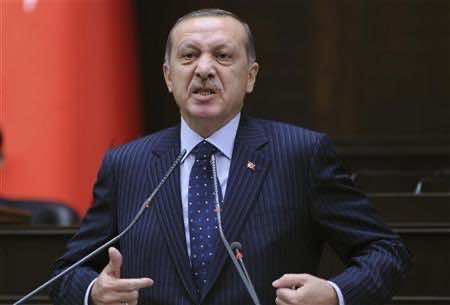 Turkey called on Syrian President Bashar al-Assad on Tuesday to step down for the sake of his people and the Middle East, tightening regional pressure on Damascus after Arab states threatened sanctions over its crackdown on unrest.

Activists said 11 civilians were killed in Syria, which also faces potential condemnation at the U.N. General Assembly’s human rights committee on Tuesday for its military campaign to crush eight months of protests against Assad.

The United Nations says 3,500 people have been killed since the protests erupted in March, triggered by Arab uprisings which toppled the leaders of Tunisia, Egypt and Libya.

“Without spilling any more blood, without causing any more injustice, for the sake of peace for the people, the country and the region, finally step down,” Turkish Prime Minister Tayyip Erdogan said, in his first direct call for Assad to go.

In a further sign that Turkey was stepping up pressure on Syria, Turkish media reported that Turkeys’ land commander inspected troops near the border.

“Fighting your own people until the death is not heroism. It’s cowardice. If you want to see someone who fights his people to the death, look at Nazi Germany, look at Hitler, look at Mussolini,” he told his ruling AK party.

“If you cannot learn a lesson from them, look at the killed Libyan leader who turned his guns on his own people and only 32 days ago used the same expressions as you.”

But, echoing the stance of Arab League foreign ministers who suspended Damascus and have threatened economic and political sanctions, he said his criticism did not mean Turkey was calling for international military action.

The Syrian Observatory for Human Rights said 11 people were killed in Syria on Monday, including four children aged between 10 and 15 who it said were shot by random gunfire from a security checkpoint in Homs province.

Local activists said the four victims in Homs were killed when tanks fired machine guns in the main street of Tal Dao. They said they had ignored a curfew announced by loudspeakers from the tanks.

“There was a strike in Tel Dao today and most shops were closed after two people were killed yesterday,” said one of the activists, who gave his name as Abu Raed. “This is a rural region and people are not used to curfews.”

The British-based Observatory said seven other people were killed around the country, including three in the city of Homs, the most defiant centre of opposition to Assad, and three others in the northern province of Idlib.

An Arab League deadline for Assad to pull the military out of urban centres, free political prisoners and start a dialogue under the 22-member group’s initiative to end the bloodshed in Syria expired at the weekend.

Assad said in an interview published on Sunday he would not bow to international pressure to stop the crackdown, saying he faced armed foes. Authorities blame the violence on “armed terrorist groups” and say 1,100 security personnel have been killed since March.

Alongside the mainly peaceful protests, an armed opposition has grown increasingly confrontational, attacking military targets and centres of power including an intelligence headquarters on the outskirts of Damascus last week.

Assad also faces U.S. and European sanctions imposed in response to the bloodshed, and a United Nations committee was expected to adopt a resolution later on Tuesday condemning “continued grave and systematic human rights violations by the Syrian authorities.”

The draft resolution, scheduled to be voted on by the General Assembly’s human rights committee cites “arbitrary executions, excessive use of force and the persecution and killing of protesters and human rights defenders.”

It also condemns “arbitrary detention, enforced disappearances, torture and ill treatment of detainees, including children” and demands an immediate end to all such violations.

The draft was crafted by Germany, Britain and France, and has five Arab states among its 61 co-sponsors.

Syrian’s U.N. envoy Bashar Ja’afari slammed it as a “declaration of war that aims to affect the independence of our political decision-making and stop us from moving ahead in our national political agendas.”

Ja’afari dismissed the five Arab co-sponsors of the resolution, Bahrain, Jordan, Morocco, Qatar and Saudi Arabia, as “lackeys.” Turkey is also co-sponsoring it.