By Feisal Omar and Mohamed Ahmed 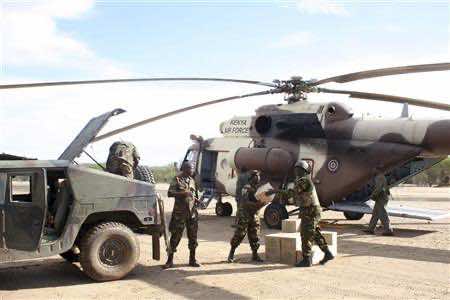 By Feisal Omar and Mohamed Ahmed

An unidentified fighter jet bombed the outskirts of a Somali rebel-controlled village in the south of the Horn of Africa country on Tuesday, killing at least one civilian, residents and members of the al Shabaab militant group said.

Local people said the village in the Gedo region, which borders Kenya and Ethiopia, was a known rebel haunt. The insurgents said none of their combatants were stationed in the strike zone at the time of the bombardment.

A Kenyan army spokesman said Kenya was not involved in the air raid and that he was unaware of any bombing in the area.

“A warplane struck the village of Yaqle. We don’t know if there were any al Shabaab casualties, but the body of an elderly nomadic woman lay on the ground,” Amina Ali, a nearby resident who rushed to the blast site, told Reuters.

Another witness, Mahmud Ali, said he heard a loud explosion from his home in El Ade about 4 km (2.5 miles) away and then saw a plume of smoke rise into the sky before he too went to Yaqle. He said he saw the woman’s body.

Neighbouring Kenya sent hundreds of troops into southern Somalia more than five weeks ago to crush the insurgents it blames for a series of kidnappings on its soil and regular cross-border attacks. Its air force has launched a wave of strikes on what it says are rebel targets.

Ethiopia too sent dozens of military trucks and armoured vehicles into central Somalia over the weekend, witnesses said.

Some Ethiopian troops passed through towns in northeastern Kenya before crossing into Somalia through the Damasa border post, residents and officials in the area said. Damasa is about 25 km from Yaqle.

“We heard heavy explosions hitting the other side of the border a few moments after a jet flew over Damasa,” said Mohamed Lesamow from the Kenyan side of the border. “We are scared. Al Shabaab could carry out revenge attacks.”

Ethiopia publicly denies its forces are inside Somalia. Addis Ababa has said a decision on whether to join the assault against al Shabaab in some form would be taken on Friday at a meeting of east African heads of state.

Ethiopia’s military engagement would open up a third front on al Shabaab, with the rebels battling Kenyan forces in the south and an African peacekeeping force — AMISOM — in the capital, Mogadishu.

The Western-backed government now controls virtually the entire coastal city, but the rebels have stepped up guerrilla-style hit-and-run attacks there since pulling most of their fighters out in August.

A remote-controlled roadside bomb in Mogadishu killed six civilians and wounded 10 others, witness Hussein Mohamud told Reuters, the latest in a string of low-level attacks that underscore the challenges in securing the capital.

“The bomb targeted a police car moving along a busy road in the (Madina) district,” Mohamud said. “The car escaped undamaged.”

It was not clear who was behind the blast. Separately, police blamed al Shabaab for an attack on a government checkpoint in the south of Mogadishu on Monday night. One person was wounded.

Meanwhile, Somali government troops clashed with al Shabaab militants bracing for battle with Kenya near the southern town of Qoqani.

“We ambushed Somali troops who wanted to attack us between Qoqani and Haye. They ran away from six of their own dead,” said Sheikh Abdiasis Abu Musab, a spokesman for the al Shabaab fighters.

A Somali soldier who declined to be named confirmed the attack but said they had killed seven militants while just one of their own had been killed. It was not possible to independently verify the accounts.

Al Shabaab commander Sheikh Said Warsan said innocent civilians had been harmed in the Yaqle air strike and vowed to hold Kenya and Ethiopia to account.

“The blood of Somalis will not be left unaccounted for. Kenya and Ethiopia will answer,” Warsan told Reuters by telephone from Baardheere in Gedo.

“(We) categorically state that no KDF soldier has been captured or is missing since the onset of Operation Linda Nchi,” Chirchir said in a statement, referring to the Swahili name for Kenya’s offensive which means “protect the nation”.