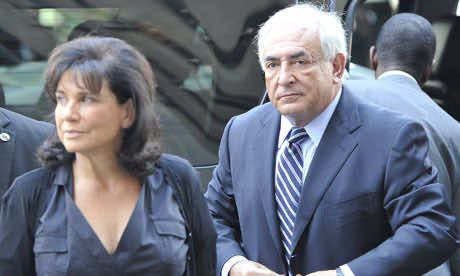 Disgraced IMF chief Dominique Strauss-Kahn is suing several newspapers and an adviser to the French president over media reports about him, including one linking him to a prostitution probe, his lawyers said Tuesday.

Former IMF chief Dominique Strauss-Kahn, who was tipped to become France’s next president before his U.S. arrest on sex assault charges, later dropped, is suing several newspapers and an adviser of President Nicolas Sarkozy over reports about him, his lawyers said on Tuesday.

The lawyers, acting on behalf of Strauss-Kahn and wife Anne Sinclair, a former TV star and art heiress, said they were pursuing French daily newspaper Le Figaro and several French magazines as well as Henri Guaino, a senior Sarkozy adviser.

“Neither Anne Sinclair nor Dominique Strauss-Kahn wish to limit free expression of ideas and circulation of information but neither do they accept their privacy being exploited and fed off for purely commercial reasons,” they said the statement.

The statement did not say exactly on what legal grounds the legal action was being taken but that it was a criminal complaint in the case of Henri Guiano.

The former head of the International Monetary Fund was ready to announce that he would run for president of France when he was arrested in New York on May 14 and charged with trying to rape a hotel maid.

U.S. prosecutors dropped the criminal charges citing doubts about the credibility of the witness, leaving Strauss-Kahn free to return to France, where prosecutors have also decided that a sex assault complaint against him came too late to be pursued in the courts.

French media have carried regular stories in recent weeks about a prostitution probe in the north of France where the name of Strauss-Kahn keeps coming up. Strauss-Kahn has asked on that matter to be given an appointment to explain himself to investigators.