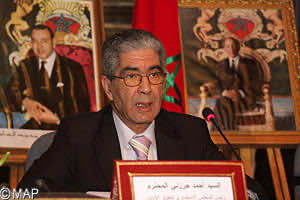 The Moroccan Monarchy with its time-honoured has always played a key role in maintaining Morocco’s stability, underscored on Monday in Washington former President of the Advisory Council for Human Rights and member of the Advisory Committee for the Revision of the Constitution, Ahmed Herzenni.

Speaking during a conference held by the Washington-based think tank , the Brookings Institution, Herzenni said that the Moroccan monarchy, one of the world’s oldest, has always proved throughout history to be a guarantor of the nation’s unity.

He said that the deep anchorage of the monarchy in the Moroccan culture grants it inherent legitimacy.

On the same occasion, Herzenni highlighted Morocco achievements in terms of political pluralism and human rights, pointing to the pioneer experience of Morocco’s equity and reconciliation committee which addressed past rights violations.

On Morocco’s new constitution, adopted by sweeping majority in a popular referendum, Herzenni said that the new supreme law confers larger powers to the Head of the Governments.