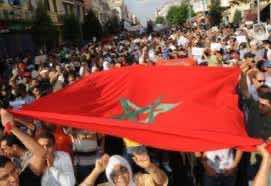 Almost 6,000 people demonstrated on Sunday (November 20th) in Casablanca for people to boycott the legislative elections, according to AFP.

The wide scale activities of the February 20th youth movement, as well as a lack of courage among candidates, has had a huge impact on the election campaign, according to Abdelwahed Ghoufal, a community association member.

“The impact of the ‘anti-vote’ demonstrations on the candidates’ election campaigns has been significant,” he said.

Around thirty four political parties are competing for a share of the 395 seats in the Chamber of Representatives, a 70-seat increase since 2007.

In all, 1,546 lists of candidates have been submitted to local constituencies, bearing the names of 5,392 candidates, both male and female, making an average of 17 candidate lists per constituency.

“This is just a show [politicians] put on to serve their own plans and aims… There’s no question of voting when it will be the same old people still ruling Morocco,” Hamza, a young student, told Magharebia.

Many of Casablanca’s poor expressed their frustration with the endless promises.

“I really don’t know what these elections are going to change in my life…. I don’t have a steady job, I don’t have a home, and there’s no chance of me finding either,” said Simohamed.

“Do you think other people in the same situation as us, who have nothing, will vote?” another man, Hamid, asked.

Movement of Social Democrats (MDS) candidate Nabil Ifzaren promised voters that he will hand over his MP’s salary, 36,000 dirhams a month, to a charity in Tangier.

The National Human Rights Council (CNDH) called Sunday (November 20th) for the public to turn out in force for the ballot, reminding them that “the vote is a personal right, a national duty, and a public act.”

Lahcen Daoudi from the PJD said the public has a duty, now more than ever, to go and vote.

“Whilst in other countries the citizens have used weapons to bring about change, here in Morocco we must go and vote to bar the way to opportunists, who will find their interests are best served by the status quo,” he said.