Morocco World News
Home Z-Headlines The PP, a risk to the Madrid-Rabat entente 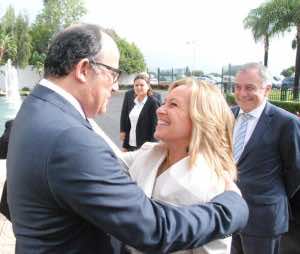 A few weeks before the general elections in Spain and Morocco took place, the foreign ministers Jiménez Trinidad and Tayeb Fassi Fihri, who may both soon leave their current positions, reiterated the importance of the interdependence between the two countries. “Morocco’s progress is the progress of Spain and the European Union,” said Jimenez.

The two ministers, also, agreed that “in the same manner Spain needs Morocco to penetrate the Arab world and Africa, Morocco needs Spain to strengthen its relations with Europe.” During the meeting the foreign ministers of Morocco and Spain considered the expediency of the moment to hold a high-level meeting between the two kingdoms.

“Spain is the second largest investor in Morocco after France. Morocco is one of the largest communities with a presence in our state. It is our obligation to carry forward the relationship between both countries harmoniously,” said Jimenez to the media after a meeting in Rabat with Spanish businessmen. For his part, Fassi Fihri, who wanted to give some prominence to the question of the Sahara in the context of the meeting, stated, “It is time to reach a consensus for which both sides can be content with. I hope that in the next rounds of negotiations, a firm agreement can be reached by which Morocco will take Spain’s advice into account.”

A complicity criticized by the PP

The outgoing government of Jose Luis Rodriguez Zapatero maintained excellent relations with the Moroccan executive, even in moments of maximum tensions. The Sahara, Ceuta and Melilla, as well as fishing and agricultural agreements were issues which added a measure of persistent tension between Madrid and Rabat but that have been managed with great leadership from the leftists Zapatero and Abbas el Fassi. The Spanish government’s position was frequently criticized by the main opposition party.

Sunday polls in Spain confirmed the anticipated victory of Mariano Rajoy, the PP leader, who is now set to become head of the Government, and whose party will even have a majority within the legislature. The identity of the next minister of Foreign Affairs is therefore vital for the future of the friendship between Spain and Morocco. “Since I took over as foreign minister I have maintained close contact with my Moroccan counterpart,” Jimenez admitted upon arrival in Rabat. Will the new Foreign Minister of the Government of PP do the same?

The two members of the PP in charge of foreign affairs, Gustavo de Aristegui and Jorge Moragas do not appear to be contenders to fill the position being vacated by Trinidad Jimenez. Moragas, very close to Rajoy, is to be given a position of closer proximity to the future president. And Arístegui, whose sincere positions on issues has taken its toll within the Popular Party, despite being a connoisseur of the intricacies of international politics and one of the great experts on Arab affairs, has been excluded from the electoral lists.

Yet analysts and observers on both sides of the Strait of Arístegui believe that Gustavo would be the suitable person to take over. The goal would not only entail maintaining the status quo of Spanish-Moroccan relations, but to improve it. “He knows Morocco well and is an excellent politician, with a great personality,” said diplomatic courier and Spanish businessman Bartol José María Espinosa based in Tangier.

“Spain should be especially interested in the direction of its relations with the Maghreb countries and Arístegui’s presence is key in advancing these relationships,” says Frederick White, who has lived in Morocco for the past two decades. Who will be the elected foreign minister? Rajoy holds the answer.