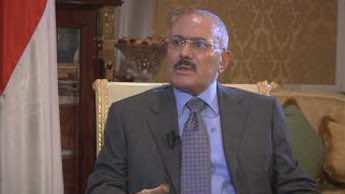 Yemeni President Ali Abdullah Saleh flew to Saudi Arabia on Wednesday to sign a deal brokered by Gulf states that would ease him from office, Yemeni state media said, after protracted protests against his rule that have crippled the country.

No more details were given about the signing ceremony, to which opposition representatives were invited. Saleh has backed out of such a deal at the last minute three times already.

The development came after U.N. envoy Jamal Benomar, with support from U.S. and European diplomats, managed to devise a compromise to implement the power transfer deal crafted by the six-member Gulf Cooperation Council (GCC).

“The president … arrived this morning in Riyadh on a visit to the Kingdom of Saudi Arabia, following an invitation from the Saudi leadership, to attend the signing of the Gulf initiative and its operational mechanism,” state news agency Saba said.

The political deadlock over protests aimed at outsing Saleh after 33 years of rule has rekindled conflicts with Yemen’s Islamist militants and separatists, threatening anarchy in a country Washington regards as a front line against al Qaeda.

Saba said Saleh had received a telephone call from U.N. Secretary-General Ban Ki-moon on Tuesday to thank him “for his efforts to extract Yemen out of the crisis in a peaceful way”.

The unrest has also raised fear of civil war on the borders ofSaudi Arabia, the world’s No. 1 oil exporter and a crucial U.S. ally. The fears are shared by Saleh’s erst while U.S. allies who had long backed him in their fight against al Qaeda.

Benomar said on Tuesday that details of the signing of the accord — a stage at which it has collapsed before — were being hammered out, after an agreement in principle.

Diplomats and opposition officials said Saleh flew to Saudi Arabia the GCC Secretary-General, Abdul Latif Al-Zayyani, refused to go to Sanaa to attend the signing ceremony. Officials say Zayyani had been embarrassed before when Saleh kept dignitaries in suspense before he refused to sign the accord.

Saleh was forced to seek treatment in Saudi Arabia for injuries suffered in an apparent assassination attempt in June after the last time he spurned the deal, which ushered in street battles that devastated parts of his capital Sanaa.

Under the GCC plan, Saleh would shift all his powers to his deputy, Abd-Rabbu Mansour Hadi, who will form a new government with the opposition and call for an early presidential election within three months.

A Yemeni official said on Tuesday that the accord was facing opposition from some senior politicians in Saleh’s General People’s Congress (GPC) strongly opposed to signing it.

Saleh would keep his title until a new president is elected.

A Yemeni official said that renegade general Ali Mohsen, who broke away from the Yemeni army after protests began in February, and tribal leader Sadeq al-Ahmar, who are not part of the accord, may try to obstruct the deal.

Those figures, along with Saleh’s son and a nephew who commands a key paramilitary unit, form a balance of forces on the ground that analysts say none is likely to tip, making a political resolution the only way out of Yemen’s deadlock.