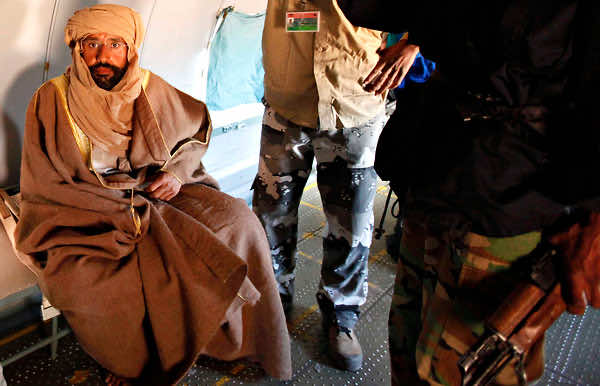 The International Criminal Court’s prosecutor has said that Libya can put Muammar Gaddafi’s son and one-time heir apparent on trial at home, provided there is a judicial process that does not shield him from international justice.

Luis Moreno-Ocampo said on Wednesday at a news conference inTripoli, the capital, that it was very important for Libya that Saif al-Islam, the captured son of the late Libyan leader, is tried inside the country.

Moreno-Ocampo arrived in Libya on Tuesday for talks with Libya’s new leaders about their plans for Saif al-Islam, who was captured on Saturday in southern Libya and is being held by fighters in the mountain town of Zintan, southwest of the Tripoli.

Libyan officials said al-Senoussi was captured over the weekend and is being held in the southern city of Sabha, although Libya’s interim prime minister, Abdurrahim El Keib, could not confirm the report.

In a statement before his arrival, Moreno-Ocampo called the arrest of Saif al-Islam and al-Senoussi “a crucial step in bringing to justice those most responsible for crimes committed in Libya”.

“Saif is captured so we are here to ensure co-operation,” Moreno-Ocampo said.

“If they [Libyans] prosecute the case, we will discuss with them how to inform the judges, and they can do it, but our judges have to be involved.”

Earlier this year, the ICC issued a warrant for Saif al-Islam’s arrest on charges of crimes against humanity.

The International Committee of the Red Cross (ICRC), which visited Saif al-Islam in Zintan on Tuesday, said he appeared to be in good health.

Steven Anderson, a spokesperson for the Geneva-based body, said the visit “took place in accordance with the ICRC’s customary working procedures” and all further findings would remain confidential.