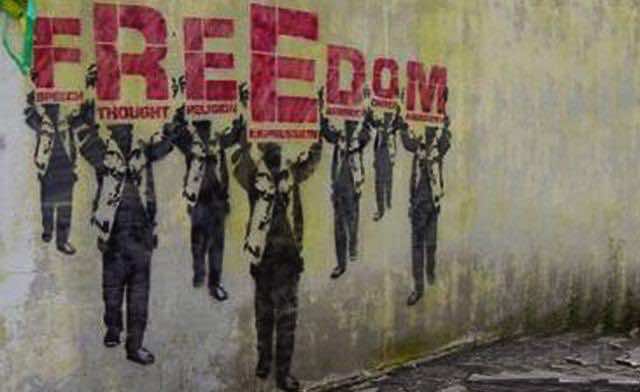 No vandalism. No weapons. Just art.

At least that is the way revolutionaries who use public spaces see it.

Graffiti has been a popular form of expression around the world, and Egypt and Tunisia are no exception as street art has been used as a means to encourage individual thought and encourage the youth to shape the future of their political landscape.

A group that calls itself the “Freedom Painters” has taken to the streets of Cairo’s downtown hub Nasr City with stenciling tools and spray paints to spread their message.

Covering the walls of the city with slogans such as “Vote” and “It’s just the beginning,” the group is a 1000-strong army actively engaging with the future of their country.

One mural shows a grumpy man set aside what appears to be a road sign with the words “I want my rights,” written in Arabic. Another mural shows an attractive woman with flowing hair that is the colors of the Egyptian flag.

While many might see graffiti as vandalism, a criminal act carried out by hoodie wearing hooligans, for the Freedom Painters it’s quite the opposite. Onlookers say that the group, and others like them, are artistic activists.

German street art collective Ma ’Claim, made up of street artists Akut, Rusk, Tasso, and Case, made their way to Cairo and Alexandria this October.

Members of Ma ’claim had started working together on common projects in 1999, but only became a group two years later in 2001. Ma ‘Claim made their way up the German and global art scene through their seamless fusion of photo-realistic graffiti and modern typography.

Last month, they brought their artistic vision to Egyptian streets. One of their most recognizable pieces was a collection of four murals, placed side by side, each depicting a sea of clenched fists raised in the air, while one hand was raised above the rest portraying a peace sign.

“It’s about the power of a movement,” said Ma ‘Claim member Andreas von Chrzanowski, aka Case, during an interview with The Art Newspaper on October 27.

Not far from Nasr City, 2083 kmto be exact, is the Tunisian capital of Tunis, where artistic activism is also rampant.

It’s been 11 months since the start of the Tunisian revolution, which sparked the Arab Spring uprisings across the region earlier this year.

Walking around Tunis, one might be lucky enough to see one of the life-sized cutouts created by ZOO Project, at least 50 of which are scattered across the Bab-Souika district. The Franco-Algerian artist’s figurines commemorate those who led the Tunisian revolution and the martyrs that died during clashes between protesters and security forces. The cutouts, which are also classed as a form of graffiti, are part of what has now been known as the martyr’s series.

Children walk by these figurines on their way to school; they are found in alley ways of neighborhoods, even in front of government buildings.

ZOO Project also went back to the wall, the root of the underground graffiti movement. The art work which probably won’t be seen by many due to its location in an alley way of an old suburb, depicts four men sitting atop each other’s shoulders hoisting the Tunisian flag, playing a game of hopscotch. The final square? “Democratie.”

In most countries, street graffiti is painted over almost immediately as it is technically a work of vandalism and authorities are quick to remove images that it deems as offensive. Graffiti in Egypt and Tunisia will probably suffer the same fate, but the art form is here to stay – until it finds its next canvas.

For the graffiti artists in these countries, the streets of Nasr and Tunis belong to the people, whichever way they choose to spread their message.