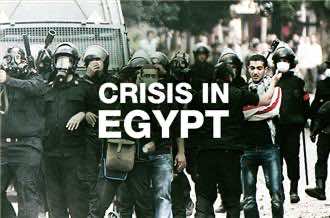 Egyptians angry over the slow transition to civilian rule have remained in the streets of the capital and other cities, continuing their protests despite apparent concessions offered by the country’s ruling military council.

In scenes reminiscent of the 18-day uprising that toppled President Hosni Mubarak in February, the square resonated with chants of “the people want to bring down the field marshal”.

Tantawi promised that the military had no interest in staying in power and said a presidential election to replace the council as the country’s ultimate executive authority would be held before July 2012, the first time Egypt’s military rulers have set a deadline for the presidential vote.

He asserted that parliamentary elections scheduled to start on November 28 would go ahead. He also suggested the possibility of a national referendum on the SCAF’s rule that would return the military to its barracks should citizens vote against the council.

“We ask for fair elections. We are doing our job in a very special era,” he said. “We do not care who runs for elections and who is elected president and yet we are accused of being biased,” he said.

The concessions followed four days of protests against army rule that have left 33 dead, many of them allegedly shot by live ammunition, and nearly 2,000 injured throughout the country.

The violence that began when riot police violently cleared a small encampment in Tahrir Square on Saturday has hardened protesters’ resolve, leading them to call for the immediate formation of a civilian “national salvation” government and the complete abidcation of power by the SCAF.

“The idea that these same heavy handed tactics [are being used], as was the case and as was the trademark of the Mubarak regime, is just angering the people even more and is making them lose trust and faith in the military,” Al Jazeera’s Jamal Elshayyal reported from Cairo.

As Tantawi spoke, Egypt’s outgoing cabinet, whose resignation was officially accepted by the SCAF on Tuesday, posted a message on its Facebook page announcing that security forces would be withdrawn from the vicinity of Tahrir Square.

But neither the cabinet’s announcement nor Tantawi’s speech ended the street fighting, which continued to rage on the side streets leading from Tahrir Squareto the Interior Ministry.

Riot police from the Central Security Forces, backed by soldiers, fired tear gas and rubber rounds to disperse mobs of young men using rocks and petrol bombs in an attempt to force their way through barricades and reach the ministry.

“I could clearly hear the sound of stun guns to try and electrocute protesters gathered around [the police]. ” Al Jazeera’s Rawya Rageh reported.

“Tantawi spent 80 to 90 per cent of the time saying how good the military is handling the transition. He’s not saying anything about the military tribunals, or the many who are serving trials,” Gharbeia said. “There is nothing about investigating the military’s conduct on the street and their conduct with the labour movement and the student movement.”

Protesters poured into Tahrir Square in thousands throughout the day, heeding a call for a million people to join the demonstrations against continuing military rule.

Sources told Al Jazeera that the SCAF had asked Mohamed ElBaradei, a presidential hopeful and opposition politician, to form a new interim government. But ElBaradei offered no public response and reportedly refused to attend the crisis meeting between the SCAF and political forces.

He was said to be hesitating over assurances regarding his authority to choose cabinet ministers.

Clashes continued as the day progressed, and ambulances weaved through the crowds to take injured people to makeshift field hospitals in the square.

“There are tens of thousands virtually from across Egypt’s political spectrum who have gathered here,” Al Jazeera’s Mike Hanna reported from the square.

The Muslim Brotherhood was the only major political group that declared it would not be at Tuesday’s demonstration. In a statement, the group said it did not want to be involved in a protest that could delay the impending vote for the lower house of parliament, scheduled for Monday.

Many Egyptians and outside analysts believe the Brotherhood’s political wing, the Freedom and Justice Party, will win a large plurality, if not a majority.

Criticism of the military has grown in recent days. Amnesty International said the SCAF had “been responsible for a catalogue of abuses which in some cases exceeds the record of Hosni Mubarak”.

In the report published on Tuesday, the UK-based human-rights watchdog said Egypt’s military rulers had “completely failed to live up their promises to Egyptians to improve human rights”.

The US, for its part, made its most critical statements yet, with Jay Carney, the White House spokesperson, describing the violence as “deplorable” and urging that elections take place on time.