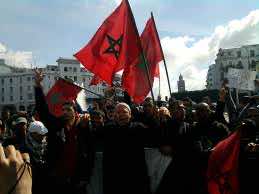 Numerous observers noted lately that some news reports regarding the number of Moroccan participants to protest marches have been blown out of all proportion. Seemingly, some reporters devoted much more time to echoing false details about the number of protestors than being engrossed in digging out the real facts on the ground.

Souhail Karam, a correspondent of  Reuters, reported on the 20th of November, that “10,000 protesters had gathered in a square in the working class Beni Mkada district” in the city of Tangier. He added that “at least 6,000 people had turned up for a parallel protest (in Casablanca), despite heavy rain”. Souhail Karam also affirmed that “two western diplomats and a resident in the capital, Rabat, put the turn out for a protest there at about 3,000 people”. As for Paul Shemm (Associated Press), he affirmed, on the same day, that “at least 3,000 people marched through the capital Rabat and another 4,000 demonstrated in Casablanca”.

Prior to any attempt to reply to these totally flawed allegations, it should be reminded that among the basic deontological ethics that should be kept in mind during any event coverage are fairness and accuracy. Reporting figures blindly (without checking their exactitude) seems a crime against the profession of journalism, in general, and unfortunately downgrades the credibility of the news agencies concerned, in particular.

Different local witnesses who were present next to the above-mentioned manifestations (in Tangiers, Casablanca and Rabat), advance that the sum of the three protest marches does not exceed 5000 people, knowing that these are the cities that witness the largest numbers of protesters in Morocco.

A well-informed source, who spoke under the cover of anonymity, asserted: “even when widening the margin of error…you know… needless to mention that most often people tend to confuse people passing by with protesters …almost 1700 people manifested in Tangier, 1300 in Casablanca and 1500 in Rabat”.

Indeed, the two news articles portray a distorted image of Morocco and tend to sell some “incomplete (if not wrong) information” that can be misleading. The two articles addressed the issue of protest marches and the boycott call for the upcoming elections in the North-African country with total disregard to the following facts:

Many countries with fragile democratic backgrounds have been violently ‘shaken’ by the ‘Arab Spring’. When it comes to Morocco, however, it drew the best of it and smoothly headed towards the strengthening of its democratic experience by initiating so many additional reforms. Unlike what happened in Egypt, Libya or Tunisia, the case of Morocco is unique in the sense that political and economic reforms had already been launched since the 1990s

The upcoming parliamentary elections (Nov.25) do not represent an end in themselves but just a step towards the election of a government that will put into concrete terms the reforms, embodied in the new constitution, that have been embraced by the people and for the people.

In short, no matter how the figures of protesters have been exaggerated by some news articles, the undeniable truth is that they remain a drop in the ocean compared to the reforms launched in Morocco.

Farid el Korchi is a contributor to Morocco World News

The views expressed in this article are he author’s own and do not necessarily reflect Morocco World News’ editorial policy.