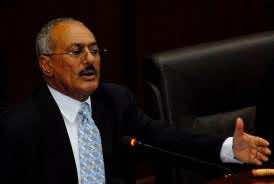 The deal will end his 33 years in office, which Saudi King Abdullah hailed as marking a “new page” in the impoverished country’s history.

Live footage of the ceremony aired by Saudi state television showed Saleh ink the agreement after almost 10 months of bloody protests calling for him to resign.

The deal will see Saleh leave office in 30 days, making way for Vice President Abdrabuh Mansur Hadi to negotiate a power transfer with the opposition in return for a promise of immunity from prosecution.

In a statement made after he signed the deal, Saleh described what had happened in Yemen as a coup against the constitution.

But he said he had hoped for a democratic transfer.

“We hoped that the peaceful transfer of power to have occurred in a democratic way,” he said, but warned that the Yemen would take “years” to rebuild itself after the crisis.

“We welcome partnership with the opposition to manage the country’s affairs and rebuild what the crisis has destroyed,” Saleh said, stressing that it should be a “real partnership.”

Before the ceremony, Saleh told U.N. chief Ban Ki-moon he will come to New York for medical treatment immediately after signing the deal, Ban said on Wednesday.

The U.N. secretary-general told reporters the Yemeni leader told him of the trip during a telephone conversation on Tuesday.

“He told me that he will come to New York to take medical treatment immediately after signing this agreement,” Ban said.

“If he comes to New York I will be happy to meet him,” the secretary general added, saying he was “encouraged by the positive development of the situation in Yemen.”

Saleh had arrived in Riyadh early Wednesday for the signing of a Gulf-sponsored power-transfer deal, official Yemeni television reported amid renewed clashes in the capital.

“The president of the republic arrives safely to the airport of Riyadh to visit the Kingdom of Saudi Arabia, following an invitation from the Saudi leadership, to attend the signing of the Gulf initiative,” a ticker running on the bottom of Yemen TV said.

Saleh’s unannounced visit came after the U.N.’s Yemen envoy said on Tuesday a deal aimed at ending months of political deadlock had been approved both by the opposition and by the president.

Ahmed al-Soufi, the Yemeni President’s press secretary, told Al Arabiya on Tuesday that the final touches were being placed on the initiative, which is scheduled to be signed by Vice President Abd Rabbu Mansour and the opposition leaders, with the attendance of the U.N.’s Yemen envoy Jamal Benomar.

“All the parties have agreed to implement the Gulf Cooperation Council (GCC) initiative,” envoy Jamal Benomar told reporters in the capital Sana’a.

The plan put forward last spring by the GCC countries headed by Saudi Arabia offers Saleh and his relatives immunity from prosecution if he hands over power to his deputy Hadi.

Benomar, who arrived in Sana’a on Nov. 10, has been working tirelessly to secure an agreement on the Gulf transition plan.

Saleh’s continued refusal to sign the initiative had triggered months of political deadlock that has left the government in a state of chaos and the economy in shambles.

The political crisis has also exacerbated tensions on the street where tens of thousands of anti-government protesters have faced a brutal 10-month government crackdown that has left hundreds dead and thousands wounded.

The plan submitted by the six-nation GCC will effectively bring an end to Saleh’s 33-year rule.

The political turmoil in Yemen has seen powerful tribes and army dissidents join opposition parliamentarians and tens of thousands of protesters in their struggle to oust Saleh.

The deputy leader of the ruling General People’s Congress, Sultan al-Barakani, told AFP Tuesday that final touches are being made to the implementation mechanism and the document of guarantees to the president and his entourage, based on the Gulf plan.

Benomar said Sunday that a U.N. Security Council meeting on Yemen scheduled for Monday was postponed.

The political crisis has also exacerbated tensions on the street where tens of thousands of anti-regime protesters have faced a brutal 10-month government crackdown that has left hundreds dead and thousands wounded.

Clashes in the capital

The clashes broke out between gunmen loyal to dissident tribal chief Sheikh Sadiq al-Ahmar and pro-Saleh troops in al-Hasaba district, while explosions were heard in the nearby neighborhood of Sufan, an Al Arabiya correspondent said.

No casualties were immediately reported in the violence that broke out hours after Saleh landed in Riyadh.