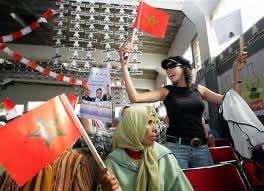 Marie-Yvonne “Maguy” Kakon, 57, is the only Jew among more than 7,000 candidates, but her campaign symbolizes the diversity of the Muslim nation.

Marie-Yvonne “Maguy” Kakon would be just another candidate contesting Morocco’s parliamentary elections on Friday – if it were not for one detail.

The 57-year-old real estate consultant is the only Jew among a total of more than 7,000 candidates in the staunchly Muslim country.

Jewish politicians are rare in the Arab world, but Kakon says it is her Moroccan rather than her Jewish identity that counts. Her presence in the elections symbolizes the diversity of the North African country where Arabs, Amazigh (Berbers) and Jews have lived side by side for centuries, Kakon told the daily Akhbar al-Yaoum.

The mother of four, who has written several books on Morocco’s Jewish culture, belongs to the small Social Centre Party (PCS), which she describes as “moderate and innovating.”

She already took 30,000 votes in the 2007 elections, an amount which would have allowed her to get into parliament, if her party had passed the threshold of 6 per cent of votes on the national level.

While the success of a Jewish candidate in a Muslim country might seem surprising, it is less so in Morocco, which many Israeli analysts regard as being among the most tolerant Arab countries towards Jews.

“Israel has no formal or informal ongoing diplomatic ties with Morocco,” an Israeli diplomatic source says, adding that Israel closed its trade office in Morocco after the Intifada erupted in the Palestinian territories in 2000.

But an article published by the Jewish Virtual Library describes Morocco as “perhaps Israel’s closest friend in the Arab world.”

In September, for instance, Al-Akhawayn University in Ifrane in Morocco’s Atlas mountains organized a symposium promoting recognition and knowledge of the Holocaust.

The conference – which went largely unnoticed by the public – was the first of its kind in an Arab country, the Israeli daily Haaretz wrote.

Jews have lived in Morocco since antiquity, already before Arabs moved into the territory inhabited by Amazigh. Waves of Jews and Muslims fled the Spanish Inquisition to Morocco in the 15th century.

Jewish “infidels” enjoyed a certain protection in their neighborhoods known as mellahs. By the 1950s, Morocco had about 300,000 Jews.

Intermittent anti-Semitic attacks, international tensions and the creation of Israel in 1948 prompted most Moroccan Jews to emigrate to Israel, France and the United States.

Israel now has about a million citizens of Moroccan origin, while Morocco has a Jewish community of only about 2,500 people. It is concentrated in large cities such as Casablanca, Agadir and Marrakech.

Kakon is the first Jewish woman to have run for parliament in Morocco. But the country has had some prominent male Jewish politicians, including Serge Berdugo as tourism minister in the 1990s.

Jews – even Israeli citizens – travel to Morocco to visit relatives or to participate in traditional pilgrimages to tombs of Jewish saints, who are estimated to number hundreds in the Muslim kingdom.

In 2009, the king referred to the Holocaust as “a wound to the collective memory” and as “one of the most painful chapters in the collective history of mankind.”

Morocco’s moderate position on the Holocaust may be partly aimed at attracting Western sympathies and support in the Western Sahara conflict, according to some observers.

Pro-Palestinian sympathy and anger at Israel are rife in Morocco, but are not necessarily directed at local Jews. “Moroccans do not identify all Jews with Israel,” a local journalist says. “Some Moroccan Jewish leftist politicians have even defended the Palestinian cause.”