Morocco World News
Home Uncategorized How Many Ethnic Jokes Does It Take to Sink a Presidential Campaign? 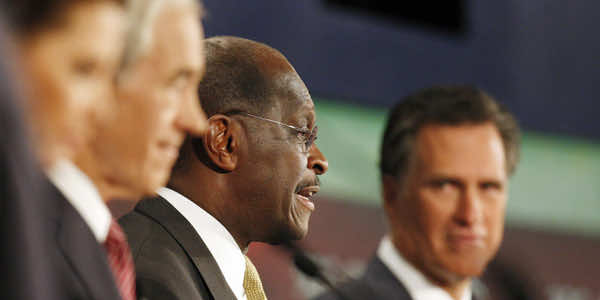 I can’t remember a Republican presidential candidate being as openly and unashamedly prejudiced as Herman Cain, the former Godfather’s Pizza CEO, who has said that he’d impose a special loyalty oath on Muslim appointees, insists that communities can decide to prevent Muslims from building mosques, and has once again told a story about his fear of Muslim doctors:

He did have a slight worry at one point during the chemotherapy process when he discovered that one of the surgeon’s name was “Dr. Abdallah.”

“I said to his physician assistant, I said, ‘That sounds foreign–not that I had anything against foreign doctors–but it sounded too foreign,” Cain tells the audience. “She said, ‘He’s from Lebanon.’ Oh, Lebanon! My mind immediately started thinking, wait a minute, maybe his religious persuasion is different than mine! She could see the look on my face and she said, ‘Don’t worry, Mr. Cain, he’s a Christian from Lebanon.'”

One of the best things George W. Bush did after the September 11 terrorist attacks was to make clear that the United States wasn’t at war with Islam, or the world’s Muslims, but the small subset of radical Islamists who sought to achieve their ends through terrorist violence or intimidation.

The subtext of Herman Cain’s jokes isn’t quite the opposite, but it is unmistakably ugly. He is essentially saying that in today’s GOP, a place where black jokes, Mexican jokes, or anti-gay jokes would all be frowned upon, it’s perfectly okay for Muslim Americans to be punchlines, because they’re scary others, even if they’re encountered in the hospitals where they work treating cancer.

The other group he has targeted — the other group it’s safe to target in a Republican primary — are illegal immigrants: after saying he’d build an electrified fence on the border with Mexico that would kill anyone who tried to cross, Cain later explained that he was joking. Are dead immigrants his idea of a punchline? He’s never explained what he found funny about electrified fences. Given the flak that Rick Perry got over that epithet on the rock that sat on a property where he hunted, the relative pass Cain has gotten for telling multiple ethnic jokes during this campaign is notable, and I don’t think a white candidate could’ve gotten away with it.