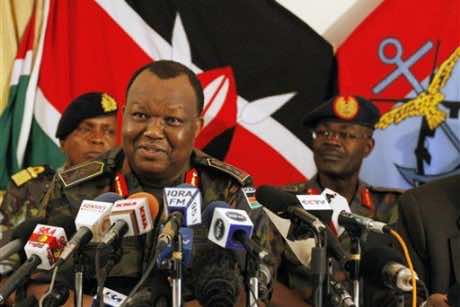 Kenya’s military push should trigger greater international efforts to stabilize Somalia and end “the expansion of terrorism’s tentacles,” the Kenyan security minister said on Wednesday, without spelling out what this would entail.

George Saitoti, a veteran politician and former vice president, said Kenya wanted the international community to “come in” and take joint steps to help Somalia, which has been without an effective central government for 20 years.

Saitoti, on a visit to Britain, declined to define what success would look like, how much the mission was costing or give an end date for the advance, but said he hoped the operation would be over by the next Kenyan election, which is due at some point between August and December 2012.

“Our cause is right and just,” he told Reuters. “The provocation has been very clear. There was no way Kenya was going to tolerate this kind of violation of our own border.”

Asked whether Kenya wanted to capture the southern Somali port of Kismayo, an al Shabaab tax raising hub, he said: “Let me put it this way: Kenya has no territorial ambitions on Somalia.”

“Our position is properly calculated … in the hope that the international community will come in and form joint efforts to stabilize Somalia, because that is the key thing.”

Kenya sent troops into Somalia last month to crush al Shabaab, accusing the militant network of frequent attacks on its security forces and tourists inside Kenya. Some Horn of Africa analysts say Kenya’s deployment inside Somalia lacks the muscle to deal a mortal blow to al Shabaab.

Asked if he expected reprisal attacks, Saitoti replied: “We know that is their tactic and we are putting measures in place.”

“ENEMY OF OUR ECONOMY”

Saitoti suggested Kenya had had no choice but to launch its push because Islamist militancy had continued to grow in the region, costing Kenyan lives. Since an al Qaeda bombing in 2002 that killed 15 people north of Mombasa on the Indian Ocean coast “the expansion of terrorism’s tentacles has gone on,” he said.

Saitoti said the militant group was now recruiting unemployed youths in Kenya. These were not just Kenyan ethnic Somalis but also Kenyans from other communities. Security experts say these young men include recent converts to Islam.

“That in fact is one of the reasons why we have decided to move, because al Shabaab had decided to come in to Kenya to recruit the unemployed youth and turn them into terrorists,” Saitoti said. “We have seen people other than Somalis who have been recruited into al Shabaab. It is terrorism.”

“Al Shabaab has been involved in piracy, kidnapping tourists and in money laundering in Kenya – that demonstrates that not only is it an enemy of our security but also of our economy.”

Saitoti dismissed the idea that the military action would damage Kenya’s painstakingly built reputation as a peacemaker and anchor of stability in Africa.

“No, look at the other side of the coin,” he said. “Would it have served any purpose at all if Kenya, in the face of the provocations where our own people have been killed, had rested on our own laurels and not done anything? As a matter of fact, Kenyans were very, very angry.”