By Caroline Alexander and Flavia Krause-Jackson 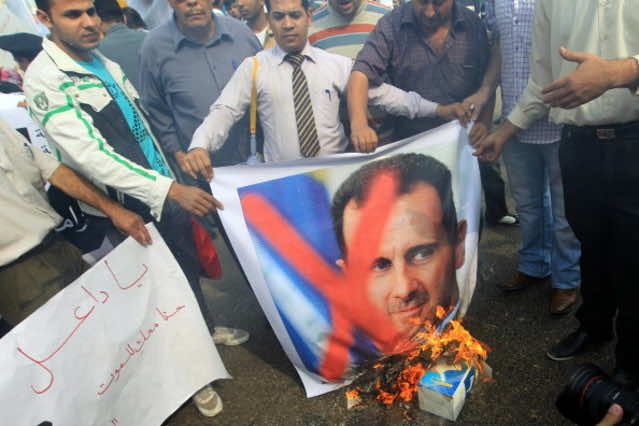 By Caroline Alexander and Flavia Krause-Jackson

When Syrian President Hafez al-Assad crushed a revolt in 1982, killing at least 10,000 people, the Arab League failed to act. A generation later, amid another government crackdown, the group has turned on his son, Bashar.

Arab League foreign ministers plan to meet tomorrow at the group’s Cairo headquarters to discuss imposing sanctions on Syria. The league had set a Nov. 19 deadline for the government to comply with an Arab peace plan.

The Arab Spring uprisings have unnerved and threatened regimes throughout the region, shaking up status quo institutions such as the Arab League. The league’s suspension of a founding member, Syria, was the boldest action by the 21- nation club since its condemnation of Muammar Qaddafi’s crackdown paved the way for the United Nations resolution in March authorizing the North Atlantic Treaty Organization bombing campaign.

“It’s a measure of the extent to which things have gone wrong,” Salman Shaikh, director of the Brookings Doha Center, said in an interview. “These guys were friends. I think they are extremely disappointed, and at some point there was the straw that broke the camel’s back.”

Images of government attacks on unarmed protesters and of torture-scarred bodies in cities like Homs, Syria’s third largest, are being viewed in homes across the region. Whether motivated by outrage, by concern for self preservation or by both, Arab kings and prime ministers aren’t turning a blind eye, as had been the case in the past.

The league’s actions “demonstrate that, as a result of the Arab Spring, governments have to be more responsive and that doing nothing is no longer an option,” said Robert Danin of the Council on Foreign Relations in Washington.

A survey of opinion in five Arab countries found the public lined up nine-to-one behind the Syrian rebels, according to Shibley Telhami, a professor at the University of Maryland at College Park, who directed the October polling in Egypt, Morocco, Lebanon, Jordan and the United Arab Emirates.

The same poll suggests that the Arab public would prefer regional leaders to act, with 46 percent of respondents saying foreign intervention in Libya was “the wrong thing to do.”

The Arab League was created in 1945, the same year as the United Nations, as the decline of colonial powers after World War II and steps leading to the creation of the state of Israel fanned the rise of Arab nationalism.

Yet in its 66-year history, a body that sought to bring Arab nations closer became known as a “club of tyrants,” according to Danin. It was hopelessly divided when dealing with one of is own, such as in 1990, when just 12 out of 20 members condemned Iraq’s invasion of Kuwait.

There are also shades of realpolitik at play, with Arab nations having different practical motivations for taking action on Syria. Qatar is establishing itself as a foreign-policy titan punching above its size. Saudi Arabia benefits from isolating Shiite Muslim Iran — Syria is its main Arab ally and conduit to arming the Hezbollah militia in Lebanon — and wants to distract attention from human-rights abuses in the neighboring Bahrain, a Sunni ally.

“There are maneuvers within the league,” said Scott Lucas, a Middle East expert at the University of Birmingham in England and founder of website EA Worldview. From the Saudi standpoint: “If everyone focuses on Syria, then Bahrain is forgotten.”

Bahrain is among League members that may be vulnerable to charges of hypocrisy. It voted to suspend Syria and Libya yet has drawn criticism itself from human rights groups for its crackdown on the mainly Shiite protesters earlier this year.

While acting against Libya may have been relatively easy for the League, given Qaddafi had few fans among member states after an alleged 2004 assassination plot against Saudi Arabia’s ruler, Assad is another story.

At least 3,500 people have died in Syria and thousands have been arrested since protests started mid-March. Human Rights Watch on Nov. 11 accused the regime of “crimes against humanity,” including torture and unlawful killings, in Homs.

The “ineptitude” of the United Nations has also prompted the Arab League to step up, according to Shaikh, a former special assistant to the UN Special Coordinator for the Middle East Peace Process.

Russia, which sells arms to Syria, and China, which buys its oil, delivered a rare double veto not seen since 2008 to block an Oct. 4 UN Security Council resolution that called for Assad to halt the crackdown. With the UN’s most powerful body paralyzed, U.S. Ambassador Susan Rice said the Arab League has taken “a very significant step” in threatening to impose sanctions for the first time.

“We, as the United States, have imposed very strong sanctions on the Syrian regime as have plenty of other states, now the Arab League is about to follow suit,” she told reporters in New York on Nov. 18.

The U.S. sanctions target top officials; Syria’s largest mobile phone operator, Syriatel; and the Commercial Bank of Syria. The European Union has blacklisted 74 people including senior military and intelligence officials and EU companies are forbidden from doing business with 19 firms and groups.

“It was absolutely clear that the Europeans and the U.S. were going to be unable to do more,” Shaikh said. “They needed the Arabs to take ownership.”

That means questioning the league’s traditional foundation of non-intervention in the domestic conduct of members.

“It didn’t act on the massacres in Syria in the 1980s, or Algeria in the 1990s,” said Omar Ashour, a lecturer in the politics of the modern Arab world at the University of Exeter in the U.K. “Sometimes, there wasn’t even a statement to condemn these acts.”

Still, the Arab League is under new leadership. Nabil El- Arabi, who took over as Secretary-General of the Arab League from Amre Moussa in July, has described the league as “impotent” and has called on reform.

Creating a formal mechanism to compel members’ to comply with its resolutions may also have to be considered, including economic sanctions, which haven’t been imposed before.

The revolt against Assad’s rule has begun to squeeze the economy. Turkey, a neighbor and key trade partner, says it will “strongly support” whatever the Arab League decides and yesterday Prime Minister Recep Tayyip Erdogan followed King Abdullah of Jordan in saying Assad should step down.