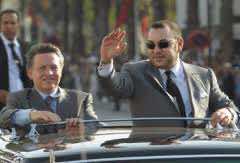 The wave of revolutions and protests over the last ten months have shaken the Arab world, forcing the region into a period of strategic restructuring. As a result of the recent movements, the wealthy Persian Gulf states have taken initiative in the restructuring by positioning the Gulf Cooperation Council (GCC), a political union and customs grouping, on the Arab board.

The six countries that make up the GCC, which has lost two important allies in the Tunisian and Egypt regimes, have appealed, at this delicate juncture, to the Hashemite and Sherifian kingdoms.

Under the influence of Saudi Arabia and Kuwait, Morocco and Jordan have been invited to join the GCC in exchange for significant financial assistance, forming an axis Rabat-Riyadh-Amman. Saudi Arabia believes the addition of these Sunni countries will restore the strategic depth lost with the fall of Hosni Mubarak.

The Saudis and other Gulf leaders are uneasy about the future of Egypt, especially how the Egyptian military will proceed with Iran and the Palestinian Hamas, and with each day that passes seem less inclined to visit Cairo

The imperialism of the “Sublime Door”

An influential figure in the strategic restructuring of the Middle East is Turkish prime minister, political activist and “imperialist,” Recept Tayyip Erdogan. Currently Turkey is positioned as the natural leader of the Arab world, supported by the legitimacy of well-chosen democratic power and could influence and serve as a model for change.

Though Turkey may ultimately play a smaller role in Arab restructuring, given the ambiguous relationship between the regime of Ankara and Tel Aviv and Erdogan’s emphasis on the “sublime door,” a reminder of the painful imperial Ottoman history. Jordan and especially Morocco can also be held up as models for change, as their leadership acknowledges the importance of democratic transition and economic development.

Given the geographical proximity and linguistic affinities of these countries, Tunisian, Libyan, and Egyptian elite are following developments in Rabat and Amman closely, which may outstrip Ankara in influence.

Erdogan is not Nasser

While Erdogan might see himself as influencing the restructuring as a new Islamic version of Nasser, it is unclear if his speech will effectively impact the masses, as Rais did in the sixties.

The situation today is much more complex, considering the power of the protests by citizens and their dubious attitude toward leadership. Since the beginning of this century, the Arabs have gained maturity and are looking beyond their borders–portraits of Nicolas Sarkozy and Barack Obama have replaced those of admired pan-Arab leader Sheikh Hassan Nasrallah.

The protest movements in Morocco and Jordan, working without a “supreme helmsman” or “irreplaceable leader,” are influencing both the Arab streets and Arab intellectuals, perhaps more than Erdogan can. This affirms a profound desire to leave behind the tradition of “fathers of the nation,” and move towards electoral process.

Karim Douichi is the editor-in-chief and publisher of  Maghreb Intelligence. Karim Douichi has accumulated extensive experience over the years working as head of publication in a number of news papers and magazines in Morocco, such as La Gazette du Maroc, La Vie économique, Aujourd’hui Le Maroc, La Vie économique, Challenge Hebdo, and the consulting firm Mena media Consulting.

This article was translated in agreement with Correo Diplomatico.