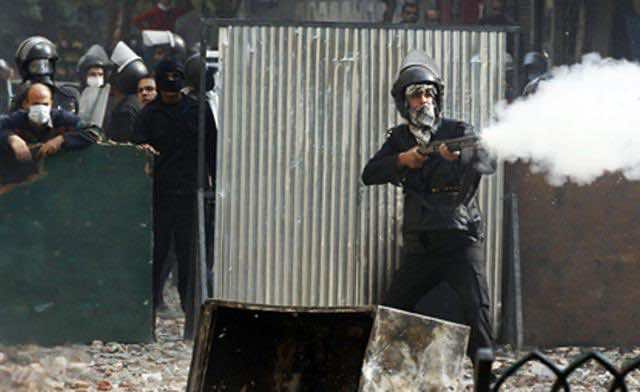 Egypt’s military rulers apologized on Thursday for the deaths of demonstrators at the hands of police as protests demanding an immediate handover to civilian control entered a seventh day.

At least 35 protesters have been killed since Saturday ? when clashes erupted ? and more than 2,000 injured, prompting expressions of concern from Western governments and a call from the United Nations for an independent inquiry into the “excessive use of force.”

Demonstrators again camped overnight in Tahrir Square, the iconic heart of the 18 days of protests that ousted veteran president Hosni Mubarak in February, to demand that the military leadership step down immediately.

A member of Egypt’s ruling military council said on Thursday the army respected the view of demonstrators in Cairo’s Tahrir Square.

“If we look at those in Tahrir, regardless of their number, they do not represent the Egyptian people, but we must respect their opinion,” General Mokhtar al-Mullah was addressing a news conference on the parliamentary election due to start on Monday.

Al-Mullah also said that Egyptians have an “absolute trust” in the Supreme Council of the Armed Forces, and activists were not put on trial because of their opinions but because of their actions.

He also said that using gunfire is a “correct” procedure to defend institutions but what is more “correct” is to save lives, and that the army did not shoot at “chests” of Egyptian citizens.

Abdel Moez Ibrahim, the head of the election committee, speaking at the same news conference, said: “As for the circumstances we are ready to conduct election under any conditions,” and that Egyptians living abroad can cast their votes by sending it in a post or a mail.

Meanwhile, Mullah also said the army hoped to form a new government before the start of the election, after accepting thee resignation of Prime Minister Essam Sharaf’s cabinet. He also said that the army has cooperated with the interior ministry in securing a plan for the elections.

Meanwhile, police and protesters are observing a truce after five days of deadly street battles. The truce came into force around 6 a.m. and was still holding by late morning.

The mass protests, which placatory moves by the military have failed to dampen, threaten to eclipse the first post-Mubarak parliamentary elections due to begin on Monday.

“The Supreme Council of the Armed Forces presents its regrets and deep apologies for the deaths of martyrs from among Egypt’s loyal sons during the recent events in Tahrir Square,” it said in a statement on its Facebook page.

“The council also offers its condolences to the families of the martyrs across Egypt.”

The statement came after a speech by SCAF chairman Field Marshal Hussein Tantawi on Tuesday which was aimed at placating protesters in the square but was heavily criticized for not making mention of the deaths at the hands of police.

The SCAF vowed to investigate and prosecute all those behind the deaths.

It also pledged to offer assistance to the families of the dead and injured, and to set up a military field hospital in Tahrir Square.

Activists said sporadic clashes continued into the night on Mohammed Mahmud, a flashpoint street connecting the heavily-fortified interior ministry to the square, where dozens of tents have been pitched.

Egyptian-American columnist Mona al-Tahawy was arrested overnight after joining the protests for democratic change. Her last post on Twitter said she was “beaten, arrested in interior ministry.”

“The square boils,” read the front-page headline of the state-owned al-Akhbar newspaper, while al-Ahram lamented the “renewed bloodshed.”

The protest deaths prompted an unusually strongly worded statement from al-Azhar, Sunni Islam’s highest seat of learning, calling on police not to shoot at demonstrators.

Grand imam Sheikh Ahmed al-Tayyeb said that any dialogue “stained with blood is doomed and its fruit will be bitter.”

Al-Azhar “calls on the police leadership to immediately issue orders not to point their weapons at demonstrators… no matter what the reasons,” Tayyeb said in a recorded address broadcast on state television.

It calls “on the armed forces to throw all their weight behind preventing confrontations between one people,” he added.

Three people died in clashes with police in and around Tahrir on Wednesday, a medic said.

A fourth was shot dead in the northwestern city of Mersa Matruh when security forces clashed with demonstrators trying to storm a police station, state media said.

Clashes were also reported in the Mediterranean city of Alexandria, where hundreds of people protested outside the military headquarters, calling for the immediate transfer of power to a civilian administration.

International criticism of Egypt’s military rulers is mounting. A rights group raised the death toll for the wave of violence to at least 38.

The United Nations has strongly condemned authorities for what it deems an excessive use of force. Germany, one of Egypt’s top trading partners, has called for a quick transfer of power to a civilian government. The United States and the U.N. secretary general have already expressed their concern over the use of violence against mostly peaceful protesters.

U.N. High Commissioner for Human Rights Navi Pillay called the images coming out of Egypt “deeply shocking,” and urged the authorities to end their “clearly excessive use of force” against protesters.

British Foreign Secretary William Hague expressed deep concern at the “unacceptable violence and loss of life” in and around Tahrir.

Egypt’s military ruler pledged in a rare televised address on Tuesday night to hold a presidential election by the end of June ? six months earlier than scheduled.

Tantawi said he was also ready to transfer power immediately, through a referendum, “should the people wish it.”