By Marwa Awad and Patrick Werr 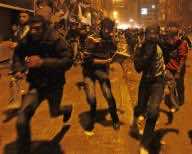 By Marwa Awad and Patrick Werr

A truce between Egyptian riot police and protesters succeeded on Thursday in calming violence that has killed 39 people in five days, and the army said there would be no delay to a parliamentary vote scheduled for next week.

Demonstrations by thousands of Egyptians furious at the slow transfer of power by military leadership to civilian rule have led to violent clashes with police, in scenes similar to the popular uprising that toppled leader Hosni Mubarak in February.

The demonstrators have vowed not to leave Cairo’s central Tahrir Square, which once again has become the cradle of public protest in the most populous Arab country.

Egypt’s ruling military council, which has promised to start parliamentary elections as scheduled on Monday, said it was doing all it could to prevent the repetition of violence.

In a statement, it apologised, offered condolences and compensation to families of the dead, and promised a swift investigation into who was behind the unrest.

A ruling council member, General Mamdouh Shaheen, told a news conference there would be no delay to the parliamentary vote, scheduled for Monday.

“We will not delay elections. This is the final word,” he said.

Another member of the ruling council, General Mokhtar al-Mullah, took a swipe at the demonstrators.

“If we look at those in Tahrir, regardless of their number, they do not represent the Egyptian people, but we must respect their opinion,” he told a news conference about the election.

He said the army hoped to form a new government before Monday to replace Prime Minister Essam Sharaf’s cabinet, which resigned during this week’s violence without giving a reason.

Abdel Moez Ibrahim, head of the parliamentary election committee, told the news conference: “As for the circumstances we are ready to conduct the election under any conditions.”

Demonstrators in Tahrir said the truce had taken hold from midnight. At midday, tear gas still lingered in the air, but there were no clashes. A crane was hauling a huge concrete barrier across the main street leading from the square to the Interior Ministry, flashpoint for much of the recent violence.

“Since about midnight or1 a.m. there were no more clashes. We are standing here to ensure no one goes inside the cordon,” said Mohamed Mustafa, 50, among a group barring a street nearby.

They were guarding a barricade made of a broken metal fence, a telephone booth laid on its side and part of a lamp post.

At the other end of the street, littered with shattered glass, lumps of concrete and heaps of rubbish, at least two army armoured personnel carriers blocked the route. Mustafa’s group said police were on the front line, and behind them the army.

“We have created a space separating us from the police. We are standing here to make sure no one violates it,” said Mahmoud Adly, 42, part of a human cordon four ranks deep.

The sustained protests in Cairo and some other cities pose the gravest challenge to Egypt’s army rulers since the council led by Field Marshal Mohamed Hussein Tantawi took over from Mubarak, overthrown on February 11.

The demonstrations appear to have polarised Egyptians, many of whom worry that unrest will prolong economic stagnation that has deepened the poverty of millions.

In a new blow to confidence, Standard & Poor’s cut Egypt’s long-term foreign- and local-currency sovereign credit ratings to B+ from BB-, with a negative outlook. It said Egypt’s “weak political and economic profile” had deteriorated further.

The thousands who thronged Tahrir  Squarewere undeterred in their determination to rid Egypt of army rule. “He goes, we won’t,” declared a banner referring to Tantawi.

The army and the Muslim Brotherhood, which expects to do well in the polls, say it must go ahead, but many protesters do not trust the military to oversee a clean vote. Some scorn the Brotherhood for its focus on gaining seats in parliament.

The military council originally promised to return to barracks within six months, but then set a timetable for elections and drawing up a new constitution that would have left it in power until late next year or early 2013.

Tantawi pledged this week to hold a presidential vote in June that could pave the way for a transfer to civilian rule, but the demonstrators, angered by army attempts to shield itself legally from future civilian control, are unconvinced.

“The military council must leave and hand power to civilians. They don’t want to leave so that their corruption isn’t exposed,” said 23-year-old student Ahmed Essam.

For now, the front lines near the Interior Ministry, a symbol of Mubarak’s hated security police, have fallen quiet.

Before the truce took hold, riot police fired barrages of tear gas at hardcore protesters, amid bursts of gunfire. Scores of young men, coughing and gasping for air, stumbled into dark side streets off Tahrir Squareto escape the acrid smoke.

At a makeshift clinic near Tahrir, doctor Tareq Salem said four people had died there on Wednesday, two from bullet wounds and two from asphyxiation. He said three volunteer doctors had been killed since the violence began.

“They were fresh graduates,” he said, splashing his face with saline fluid to counter the effects of the latest barrage of gas. One died of suffocation, the other two of bullet wounds sustained while assessing injuries outside, he said.

Interior Minister Mansour el-Essawy told state television that security forces had only fired tear gas, but said unidentified people had been shooting from rooftops near Tahrir.