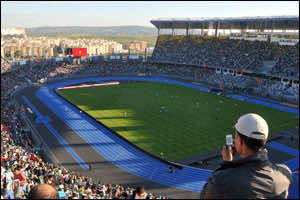 The  Chairman of the Organizing Committee of  the first ever  CAF U-23 Championship, Mr. Abo Rida praised the growth and development of African football highlighting the birth of CAF’s newest tournament as evidence of the positive work taking place on the continent under the leadership of President Issa Hayatou.

Mr Abou Rida thanked the Moroccan U-23 Organizing Committee for the sterling work put into hosting the tournament and expressed satisfaction that all was on course for the tournament which starts Saturday 26th November in Tangiers.

“There have been major developments in football on African continent and notable success stories and the inaugural U-23 African Championship adds to this impressive record” added Mr. Abou Rida as he welcomed the delegations in Marrakech, one of the two venues of the eight team tournament.  CAF 2nd Vice-President Mr. Almamy Kabele Camara congratulated the Moroccan Local Organizing Committee for their renowned hospitality and preparations for the competition.

The U-23 African Championship will also serve as the African London 2012 Olympic qualifying finals with the top three finishing teams automatically heading to London, while the fourth placed side will face a play-off against an Asian side in April 2012 for a possible fourth Africa spot.

Nigeria kicks of the tournament on Saturday 26th of November against hosts Morocco in a group A encounter to be played in Tangiers. The opening match will be followed by Algeria against Senegal at the same venue.

Group B matches start the following day 27th November with the double header in Marrakech featuring Egypt against Gabon first to be followed by South Africa versus Cote d’Ivoire.