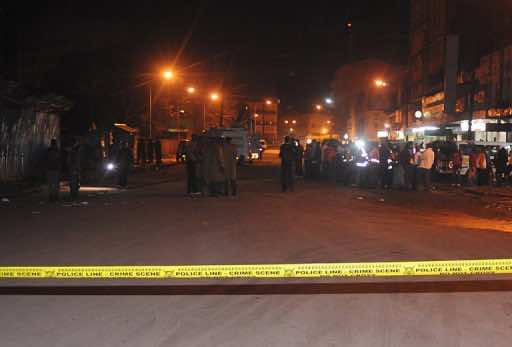 Five weeks after Nairobi sent troops into Somalia, a Kenyan soldier was killed by a roadside bomb while on patrol along the border warzone and explosions at a border town killed three.

Blasts at a restaurant and a shop in the border town of Garissa, suspected to be caused by grenades, killed three and wounded 27 on Thursday evening.

Kenya ordered soldiers across the border in October to crush al Shabaab rebels who it said had attacked its security forces and tourists inside Kenya.

“I have just received reports that two victims who were brought to the hospital have succumbed and died,” Mohamed Sheikh, Provincial Medical Officer for North Eastern Province, told Reuters.

A medic at the Garissa Provincial Hospital said the death toll had risen to three, with 27 wounded. Local media said that up to three other blasts had been reported.

Furniture, food and utensils were scattered around the restaurant where one of the blasts took place. There was blood on the ground at the scene of another blast outside a shop.

“One of the dead persons, a male, died instantly in front of my shop,” shopkeeper Emily Otieno told Reuters.

Garissa, a town in northern Kenyan, is an important military base, from where ground forces have been deployed across the frontier into Somalia.

Although there appears to be little progress on the ground in Somalia as torrential rains have bogged down operations, more airstrikes have been launched on al Shabaab strongholds in recent days and there have been skirmishes and bomb attacks in northern Kenya.

A senior Somali officer said a number of militants were killed and several captured during the strike.

“We attacked today, together with our Kenyan allies, an al Shabaab base in Dalbes jungle, between Hawina and Tabda. Before our infantry got in, helicopters bombed the whole area,” Abdikarim Ali Yusuf told Reuters from Tabda in southern Somalia.

In the Kenyan frontier town of Mandera, a roadside bomb killed one Kenyan soldier and wounded four while they were on patrol in a truck on Thursday morning.

A huge fire engulfed the truck, residents said. Five wounded were airlifted to Garissa for treatment but one subsequently died.

“I heard a heavy explosion… I saw smoke. The truck was burning and was reduced to a shell,” said Ibrahim Mohamed. “I saw three officers on the ground, they were all crying out. Their bodies were blood-stained.”

Residents said the army had rounded up people in Mandera town following the blast, although Chirchir denied this.

Kenyan Colonel Cyrus Oguna said it was too early to say whether the attack was the work of al Shabaab or bandits.

Kenya is the latest foreign power to try to stabilise Somalia, which has been mired in violence for two decades since the overthrow of dictator Mohamed Siad Barre in 1991 allowed first warlords, then Islamist militants, to step into a power vacuum.

Al Shabaab, fighting to impose a harsh interpretation of sharia law, has said it take revenge against Kenya.