November 25, 2011By AL ARABIYA WITH AGENCIES 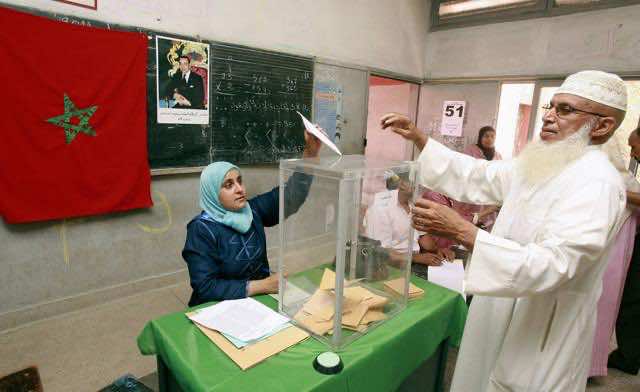 Moroccans began voting in the first legislative elections since the introduction of constitutional reforms that give parliament and the prime minister more powers with the Islamist-rooted Justice and Development (PJD) expected to win the largest share of seats.
The election, the second in North Africa since the Arab Spring uprisings began, pits the moderately Islamist Justice and Development party against a coalition loyal to King Mohammed VI.

Opinion polls are not allowed but observers said the opposition Justice and Development Party would make strong gains after a similar success by a moderate Islamist party in Tunisia’s first democratic election a month ago.

Its main rival is the Coalition for Democracy, an eight-party pro-monarchy bloc that includes two of the current five governing parties — the Popular Movement and Finance Minister Salaheddine Mezouar’s National Rally of Independents party.

A proportion of them have been reserved for women and others for younger deputies in a bid to give the assembly, until now dominated by ranking public figures, a more modern look.

Under constitutional reforms backed by the king earlier this year, the new government that will emerge from the election will have more powers than ever before, though the king still has the final say on issues of defense, security and religion.

But the move towards greater democracy could falter if polling day is marred by the kinds of vote-buying that has happened in the past, and if afterwards there are signs that palace officials are trying to meddle in the new government.

“The rulers know they cannot continue to run public affairs the way they had been doing in the past.”

Morocco’s leaders – and their Western allies – say the country is a model for the Middle Eastthat offers a positive alternative to the convulsions of the Arab Spring.

Since succeeding his father to the throne in 1999, King Mohammed has won international praise for improving human rights.

When demonstrations, inspired by the Arab Spring, broke out earlier this year, he responded deftly by backing constitutional reforms that took much of the momentum out of the protest movement.

But there remains a vocal minority who say the king’s reforms do not go far enough. Thousands of people joined protests in several cities at the weekend to back calls for a boycott of the election.

The bigger concern for the palace is not the boycott but that apathy among ordinary Moroccans will produce a low turnout, taking the shine off what is being portrayed as a showcase for democracy.

Away from Morocco’s political classes, many people struggle to see how this election represents anything new, especially as the main players have all been on the scene for years and are a part of the establishment.
“This election will be no different from the others, nothing has changed,” said Redouan, a 21-year-old man in a working class district of the capital, Rabat. “Same faces, same names. Same political parties.”

The monarch has said he wants elections that are “free, fair and competitive”. But there are already signs the murky electoral practices of the past are still in play.

“The bulk of the candidates running in these elections are prominent land owners and businessmen and we are already hearing once again of massive use of money in these polls,” he added.

Under this year’s constitutional reforms, the king will choose the next prime minister from the party that wins the biggest share of the vote. It is already clear Abbas al-Fassi, who holds the job now, will be replaced because his Istiqlal party is widely unpopular.

Their principal challenger is the Coalition for Democracy, an alliance of eight parties that was formed in October.

The bloc is led by the finance minister in the outgoing government but many analysts say its principal power-broker is a friend of the king who used to hold a senior interior ministry post before founding a political party.

With opinion polls banned in Morocco in the 15 days before polling day, it is not clear which of them will win. Analysts say it is too close to call.

Whichever bloc emerges with the most seats in parliament, they are unlikely to be able to form a government on their own. That will force them to seek an alliance, and possibly even a “grand coalition” between the Islamists and the liberal bloc.

That worries economists, who want to see a cohesive government able to narrow the budget deficit, reduce the 30-percent-plus youth unemployment rate and address the needs of the 8.5 million Moroccans below the poverty line.

“What we want to see is a strong government,” said Liz Martins, a senior Middle East economist at HSBC.

“Our concern is that Morocco ends up with a divided parliament and a not so-homogenous government that will not be able to get anything done. That would be a danger.”