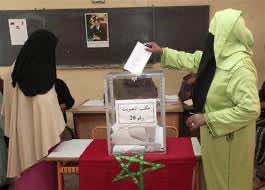 Moroccans voted in a parliamentary election on Friday that could yield their most representative government ever, after King Mohammed ceded some powers to prevent any tumultuous spillover of Arab Spring uprisings.

The election will be a litmus test of the ability of Arab monarchies to craft reforms that would placate popular yearning for greater democracy without violence-ridden revolts of the sort seen in Tunisia, Libya, Egypt, Yemen and Syria this year.

Some 13.6 million Moroccans registered to vote in Friday’s election, the North African country’s ninth since it gained independence from France in 1956.

“I will vote, maybe later before the polling station closes,” said shoe shiner Mohamed as he crouched waiting for customers on a busy Rabat boulevard.

“Last night a friend explained to me what elections are all about with all the troubles in Arab countries: I have to vote so that we can end the misery we live in. That’s all we have for now: patience and vote,” he said.

In contrast to previous elections when the result was evident in advance, the latest vote is a closely-run contest between a moderate Islamist opposition party and a new coalition of liberals with close ties to the royal palace.

“We don’t know what to expect. We hope voter turnout will exceed 50 percent and that today we will mark a victory of democracy,” said Abdelilah Benkirane, who leads the moderate Islamist Justice and Development Party (PJD), as he voted in Rabat’s middle-class Les Orangers neighborhood.

His rival Salaheddine Mezouar, who leads the liberal Alliance for Democracy coalition, also would not be drawn into making predictions.

“The feedback is positive so far … People are going to the polling stations … I’m confident Moroccans are well aware of the particular meaning of the current context,” Mezouar told Reuters as he voted in the upper-class Souissi neighborhood.

Under constitutional reforms backed by King Mohammed earlier this year, the new government that will emerge from the election will have unprecedented powers, though the king retains the final say on matters of defense, security and religion.

CONCERN ABOUT VIABILITY OF NEXT GOVT

Whichever bloc emerges with the most seats in parliament is unlikely to be able to form a government on its own. That will force them to seek an alliance, and possibly even a “grand coalition” between the Islamists and the liberal bloc.

That worries economists, who want to see a cohesive government able to narrow the budget deficit, reduce the 30-percent-plus youth unemployment rate and address the needs of the 8.5 million destitute Moroccans.

The king will choose the next prime minister from the party that wins the biggest share of the vote. It is already clear Abbas Al Fassi, who holds the job now, will be replaced because his Istiqlal party is widely unpopular.

The shift towards greater democracy could falter if polling day is marred by vote-buying common in the past, and if signs crop up afterwards that palace officials are trying to meddle in the new government.

The Moroccan monarch has said he wants elections that are “free, fair and competitive”. But there are already signs the murky electoral practices of the past are still in play.

Since succeeding his father to the throne in 1999, King Mohammed has won international praise for improving human rights, although the reform drive of his earlier years in power has lost momentum in the last few years.

When demonstrations, inspired by the Arab Spring, flared earlier this year, King Mohammed responded by reinvigorating the reform process and offering constitutional amendments that took much of the momentum out of the protest movement.

But there remains a vocal minority who say his reforms are not enough. Thousands of people joined protests in several cities last weekend to back calls for a boycott of the election.

The bigger concern for the palace is not the boycott but that apathy among ordinary Moroccans will produce a low turnout, taking the shine off what is being portrayed as a showcase for budding democracy.