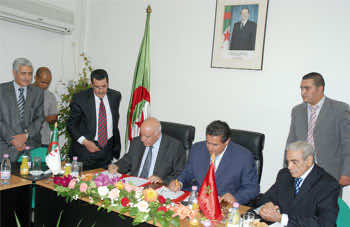 The 7th Agriculture International Fair of Algiers, which closed on Thursday, was an occasion to showcase the progress made by Morocco in the field of agriculture and reinforce cooperation with Algeria.

The event, in which around 150 agriculture professionals and thirty enterprises representing Morocco took part, celebrated the Kingdom as a guest of honor and featured a forum about the strategies developed by Morocco and Algeria to bolster agricultural production.

On the sidelines of the Fair, Moroccan and Algerian agriculture professionals signed a partnership agreement to promote cooperation and trade between the two countries.

Another three cooperation agreements in the field of technology cooperation, apiculture and agricultural fairs were inked in the presence of Morocco’s Agriculture and Fisheries Minister Aziz Akhannouch and his Algerian peer Rachid Benaissa.

The Kingdom’s participation in the four-day event came after the ministries of Agriculture of Morocco and Algeria signed a Memorandum of Understanding to develop agricultural partnership, trade, scientific research and food security.

Stretching over 9,880 square meters, the fair will bring together over 180 exhibitors representing 18 countries.