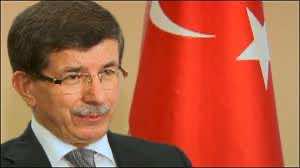 Foreign Minister Ahmet Davutoglu had described the ultimatum to accept a mission of several hundred observers or face sanctions as a last chance for President Bashar al-Assad’s regime.

“Syria was expected to yes to the observers… unless there is a reality it hides about the situation in Syrian cities,” Davutoglu was quoted as saying by the Anatolia news agency after the deadline’s expiry.

“As it said no, it increased… the concerns on the humanitarian situation,” he said.

Humanitarian organisations and journalists have had very little access to much of Syria since the regime started cracking down on protests in March, killing at least 3,500 people, according to the United Nations.

“It is a last chance, a new chance for Syria,” Davutoglu had told reporters in Istanbul shortly before the 1100 GMT deadline for Syria to comply with the notice.

“We think it is now vital to put an end to the suffering of the Syrian people… and the bloodshed,” he said at a joint press conference with his Jordanian counterpart Nasser Judeh.

The new Arab warning was issued Thursday at a meeting of foreign ministers in Cairo, where the 22-member bloc also for the first time called on the UN to help resolve the crisis.

Turkey’s Prime Minister Recep Tayyip Erdogan and Jordan’s King Abdullah II have both called on Assad to quit over the violence.

“I hope that Syria will sign this accord,” Judeh said, referring to the Arab peace plan, adding that it represented “the collective will of the Arab world”.

Davutoglu warned that Syria would be isolated by Turkey, Arab states and the entire international community if it rejected the Arab proposals, and warned that Ankara could adopt further measures against the regime.

“Today is a day for an historic decision… and is a test of the good will of the Syrian administration,” he said after talks with Italian Foreign Minister Giulio Terzi.

Davutoglu said the foreign ministers of the Arab countries might meet on Sunday to discuss further on Syria, according to the developments, and he would be participating as well.

Turkey has been increasingly strident in its criticism of the regime in neighbouring Syria, once a close ally, and has already halted joint oil exploration and threatened to cut electricity supplies.

“We are absolutely opposed to any intervention in Syria and reject any operation that would involve Turkey against this country,” Arinc told journalists Thursday.

In his blunt call this week for Assad to step down, Erdogan branded him a coward and warned he risked the same fate as dictators who met bloody ends.

Turkey has ratcheted up the its criticism of Assad since its diplomatic missions came under attack by pro-government demonstrators in several Syrian cities earlier this month.

Tensions were heightened further on Monday when two busloads of Turkish pilgrims travelling through Syria on their way back from the hajj in Mecca were attacked by Syrian gunmen.

Turkey, which is already sheltering about 7,000 Syrian opposition activists who fled their home, is however mulling plans for a buffer or no-fly zone on its border with Syria.

Among those on Syrian soil is Riyadh al-Asaad, who defected from the Syrian army and is now leading a group of deserters in the rebel Free Syrian Army.